One of Donald Trump’s favorite pastimes is exalting himself and his deranged belief in his omnipotent awesomeness. He is constantly bragging that he is the best at whatever is occupying his cartoon brain at the moment, and he thinks he knows more about everything than anyone else. It’s symptomatic of his pathological conceit and malignant narcissism. 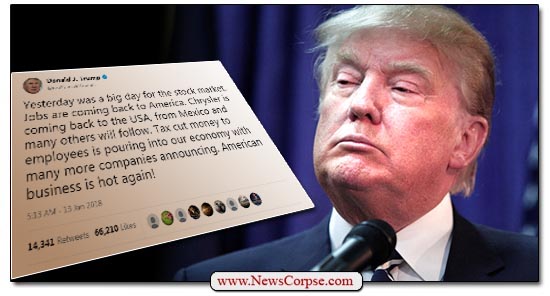 Among the subjects that Trump regards as proof of his greatness is the state of the economy. But his tedious and misleading assertions about the soaring stock market only expose how little he understands it. In a tweet on Saturday morning Trump said that:

Yesterday was a big day for the stock market. Jobs are coming back to America. Chrysler is coming back to the USA, from Mexico and many others will follow. Tax cut money to employees is pouring into our economy with many more companies announcing. American business is hot again!

For the record, that tweet replaced one he posted earlier but deleted. It said that:

“Yesterday was another big day for jobs and the Stock Market. Chrysler coming back to U.S. (Michigan) from Mexico and many more companies paying out Tax Cut money to employees. If Dems won in November, Market would have TANKED! It was headed for disaster.”

While it’s true that the stock market has risen steadily during Trump’s short residency at the White House, the whole truth is that investors are currently enjoying the second longest bull market in history. And it started in 2009, at the beginning of President Obama’s first term. There is no indication that the market was “headed for disaster” as Obama’s presidency wound down. In fact, the market performed better during Obama’s last year than it has during Trump’s first. What’s more, the performance of the stock market, the economy, and employment, has to be credited to the Obama administration because all of those metrics were ascending throughout his term and were the result of his policies. There has not been a single Trump initiative implemented that would impact any of them

But Trump is going to regret his shameless boasting if he continues to insist that he is the primary driver of the market’s success. And it’ll be an epic backfire that puts real teeth into Trump’s backside. It’s always dangerous to rely on stock market performance to validate the economy. There are too many factors that can shift investor sentiment. It is a fluid indicator that could reverse course tomorrow. Indeed, many stock analysts regard the market’s current position as overvalued. These analysts are predicting a “correction” that could send the markets down significantly. Furthermore, the market does not reflect the economic realities of most Americans. Other economic indicators (i.e. wages) are showing only small advances. The beneficiaries of stock gains are predominantly the usual suspects of the GOP (Greedy One Percent).

The most profound insight into market activity I ever heard was that “the stock market always goes up – just not in a straight line.” The coming correction, and perhaps a bear market, is a certainty. When it occurs Trump will no longer be able to pretend that he is the Creator of all wealth. He will cease to have this data to point at and falsely take credit for. And when that happens he will be held to account by anyone who took his proclamations of economic genius seriously.

The one person who will not hold Trump accountable, though, is Trump. He will surely rush to blame whoever is convenient. The most likely target will be Obama, but with Trump it could also be Hillary Clinton, Kim Jong Un, the fake news, the “Deep State,” or the aliens of Area 51. So smart investors should be prepared for both a market downturn and a ludicrous justification for it by a certifiably insane president who has never been fit for service.