Attorney General Jeff Sessions just announced that he will begin to issue subpoenas to sanctuary cities. It’s an effort to force Donald Trump’s racist federal immigration policies down the throats of local jurisdictions. This obsession by Republicans to dehumanize immigrants has overtaken almost every other item on their agenda. It’s what derailed the budget negotiations last week and led to the shutdown of the government. 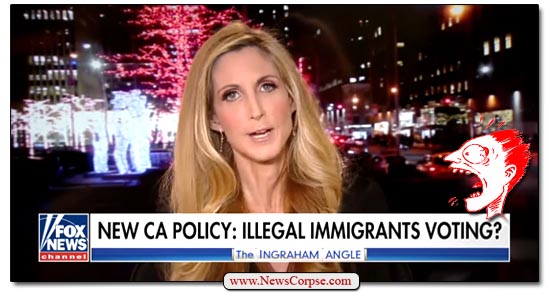 Last year Trump’s phony voter fraud commission was disbanded because state election officials refused to participate with the blatantly biased operation that couldn’t find a scintilla of evidence that any voter fraud had occurred. The whole charade was launched because Trump wanted to invalidate the fact that he lost the popular vote by three million votes.

Undaunted, the right’s determination to sow distrust in democracy continues. And Fox News leads the way. They are orchestrating a well coordinated campaign to blame undocumented immigrants for imaginary voting irregularities. The latest salvo in this contrived war was fired on Tuesday night’s episode of the Laura Ingraham Angle (video below). The segment was introduce by Ingraham asserting that:

“Under new California law people will be allowed to vote, and it will happen actually automatically when they obtain old or new drivers licenses regardless of whether they are U.S. citizens. As leftist politicians import voters they still don’t seem to understand that there are actually dangers when this happens.”

Oh No! People will be allowed to vote? What’s next, a representative democracy? Surely that is against the long-held principles of Fox News, Ingraham, and her guest Ann Coulter. But make no mistake, Ingraham’s dismay over improper voting is entirely a figment of her deliberate deception. Democrats are not, and cannot, “import voters.” The law is clear that only U.S. citizens are permitted to vote. The law referencing voter registration through driver’s licenses accounts for that and does not send registration data to the Secretary of State unless the applicant is eligible.

This fact is even stated in an article on the Fox News website. Although the article also falsely states that a “New California Policy Opens the Door to Illegal Immigrant Voting,” buried near the end is this errant factoid:

“Undocumented immigrants obtain a special driver’s license that notes on it ‘Federal limits apply.’ […] “They’re asked if they’re 18, if they’re U.S. citizens. They don’t move on to the voter registration if they’re not eligible.”

That ought to have settled the debate and eliminated the need to even bring this up. Undocumented immigrants get a different license than U.S. citizens, and they do not get automatically registered to vote. The same is true for legal, non-citizen immigrants. And the same is true for sixteen and seventeen year olds, who are old enough to drive but not to vote.

So Fox News knows that the system is set up to only send registration information for applicants who are eligible. But they are nevertheless hyperventilating over massive illegal voting that isn’t occurring now and never has. Their only objective is to incite fear among their bigoted viewers and exacerbate the hatred and division that has become the primary political strategy of the Trump Republican Party.

But this tactic will surely backfire. That’s because there really are millions of Latino citizens who see this overt prejudice and will be motivated to show up at their polling places and throw the bigots out of office. And although it may be several years away, the legal immigrants who eventually become citizens aren’t going to be any more likely to vote for racist Republicans. So good work, Fox News. And good luck when those Southwest red states like Arizona and Texas turn bright blue.