It’s Monday morning and Donald Trump is deeply embedded in his ritual of “Executive Time,” stretched out with last night’s cheeseburger and his (not very) smart phone. As usual, he is glued to his daily so-called “intelligence” briefing from the “Curvy Couch” potatoes of Fox and Friends, who are his most trusted advisers on pretty much every issue. What could possibly go wrong? 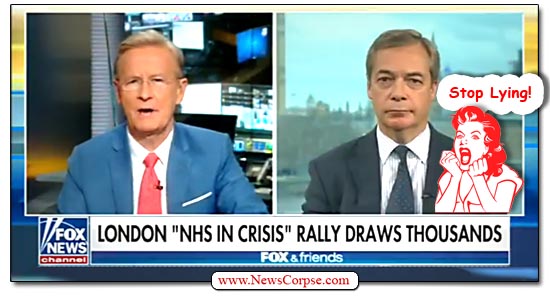 The crew at Fox News prepared a lengthy report on alleged problems with Britain’s National Health Service (NHS). They invited ultra-rightist British politician, and Fox News contributor, Nigel Farage, in for a well-scripted segment bashing universal healthcare (video below). The apparent inspiration for these eight minutes of unadulterated hogwash was a report that thousands of protesters took to the streets of London to express their dissatisfaction with the U.K.’s health care system. And our TV-addicted president was paying close attention. He tweeted that:

The Democrats are pushing for Universal HealthCare while thousands of people are marching in the UK because their U system is going broke and not working. Dems want to greatly raise taxes for really bad and non-personal medical care. No thanks!

And giving credit where credit is due, Trump shortly after acknowledged his pals at Fox and Friends for enlightening him:

Thank you to @foxandfriends for exposing the truth. Perhaps that’s why your ratings are soooo much better than your untruthful competition!

You have to wonder why Trump sounds “soooo much” like a thirteen year old girl when he tweets. But more to the point, you should wonder why he is soooo oblivious to the truth. The President, following his marching orders from Fox News, completely misunderstood the British rallies. The people were, in fact, protesting the Conservative government that has been cutting funding to the NHS and curtailing services. The marchers were in favor of their universal healthcare and were demanding that the NHS be properly funded. British leaders, including the Conservative Party Secretary of State for Health and Social Care, lashed out at Trump’s ignorance:

I may disagree with claims made on that march but not ONE of them wants to live in a system where 28m people have no cover. NHS may have challenges but I’m proud to be from the country that invented universal coverage – where all get care no matter the size of their bank balance https://t.co/YJsKBAHsw7

Wrong. People were marching because we love our NHS and hate what the Tories are doing to it. Healthcare is a human right. https://t.co/Pmo2xYSqZh

The Farage interview on Fox News brazenly lied about the purpose of the demonstrations and the state of British health care. And to make matters worse, Farage went to great lengths to blame what he alleged were problems on immigrants:

True to form, Fox News is seeking to make immigrants the cause of every problem that rich, pseudo-patriotic, white, Christianists suffer through. Whether it be the supposed hoards invading the U.K., or the imaginary masses streaming into the U.S. across the Rio Grande. Foreigners always seem to be the cause of whatever these bigots happen to be upset about at any given time. And America’s first TV game show president buys into it and spreads his diseased ignorance to the glassy-eyed disciples who worship him. it’s a closed loop of hate and stupidity that feeds off of itself.

4 thoughts on “Confederacy of Morons: Trump Thanks Fox and Friends for Funneling Him Another Blatant Lie”