The Republican chairman of the House Select Committee on Intelligence, Devin Nunes, spent the last couple of weeks alleging that he had proof of an all-consuming, “deep state” conspiracy to destroy Donald Trump. He didn’t. But that didn’t stop him from beating the drum for partisan drivel that was giddily embraced by many of his GOP colleagues, as well as the conservative media echo chamber.

Not surprisingly, Fox News was the first, and most enthusiastic, torch carrier for the overblown hype that Nunes was peddling. Take a look at how they presented the “news” announcing the memo’s release: 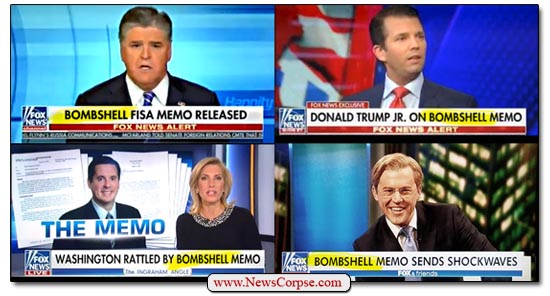 Okay, that last one in the bottom-right was from Saturday Night Live, but even they have better journalistic ethics than Fox News does. The others are from Fox’s primetime Trump-fluffers Sean Hannity and Laura Ingraham, and Saturday’s pitiful wannabe propagandist, Jesse Watters. And what they all have in common is the compulsion to characterize the super-dud Nunes memo as a “Bombshell.”

Let’s be clear, the memo fell as flat as the Earth that Fox’s science deniers are perpetually squawking about. It failed utterly to prove any of the allegations its authors and promoters had put forward. In fact, it literally proved the case made by Democrats that the FISA court’s granting of a surveillance warrant for Trump flunky Carter Page had nothing to do with the Russia investigation or the work of special counsel Robert Mueller. If anything, that was the “bombshell” produced by the memo. And even several Republicans who sit on the Intelligence Committee agree. As reported by Talking Points Memo:

None of these Republican members of Nunes’ committee agree with Nunes. Nor do they agree with Trump’s deranged tweet that the Nunes Memo “totally vindicates” him. The measure of psychosis that Trump displays by his narcissistic self-delusion is off the scale. And therefore, so is the hyperbolic, pro-Trump editorializing of the well-orchestrated Fox News “bombshell” amen chorus. They can’t even tell the truth when their own side is dismissing the vacuous memorandum (with an emphasis on the “dumb”).

And don’t expect the designated media expert of Fox News, Howard Kurtz, to set the record straight. He is currently promoting his new book, Media Madness, that is a right-wing take on how much the media allegedly hates Donald Trump. (To be accurate, it isn’t just the media. It’s the vast majority of Americans, but that’s another subject). One of the reasons that Kurtz’s book has rocketed up to #710 on Amazon is that he is undoubtedly the worst media analyst in the business. In one of his recent book tour appearances on Fox News (of course) he said that…

“There is something about Donald Trump, the candidate and now the president, where many journalists and commentators believe they have some kind of mission to save the country from an erratic president. And that’s not journalism.”

Actually, that absolutely is journalism. Kurtz apparently thinks that the mission of the media is to be an obedient lap dog that serves no purpose other than presidential stenography. But the Founding Fathers put a unique protection in the Constitution for freedom of the press specifically because it is sometimes required to take positions that will offend the powerful. It is the duty of the press to alert citizens when their leaders are corrupt, lying, treasonous, ignorant, and even erratic. And it’s all the more critical when we have a president who is all of the above. That is, without a doubt, a real bombshell that is ready to blow bigly.