When Donald Trump spoke at the rally in Pennsylvania for some GOP candidate whose name he barely mentioned, Trump naturally launched into a medley of his campaign’s greatest hits. One of those most clamored for by his audience of fanatics was that old familiar refrain “Build the Wall.” And Trump didn’t disappoint his fans as he once again promised that the wall would be built “100 percent.” 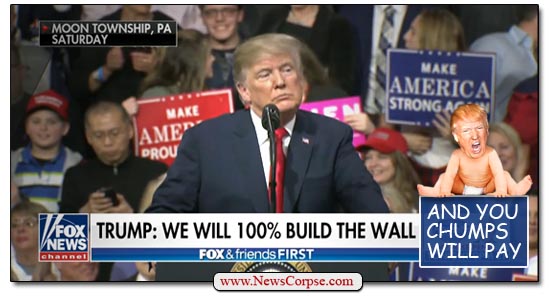 The following day Fox News jumped on this critical breaking story with a report on Fox and Friends First. Host Heather Childers interviewed the Trump sycophant head of the so-called National Border Patrol Council, Brandon Judd. In Childers introduction of Judd she summarized what would be the theme of the whole segment:

“A brand new report says the wall could pay for itself by eliminating the need for welfare and other taxpayer funded benefits given to illegal immigrants.”

Wow, really? Actually, no. The report cited by Childers was published by the ultra-conservative assembly of xenophobes known as the Center for Immigration Studies (CIS). It concluded that undocumented immigrants in the United States were consuming sixty-four billion dollars in federal benefits from welfare, public education and refundable tax credits. Outside of education, Childers and CIS were simply making most of that up. The immigrants in question are not eligible for welfare of any type, including ObamaCare. And how can they receive refundable tax credits if they aren’t filing tax returns? The truth is that immigrants provide far more financial benefits to the the country than anything they consume.

Through a flurry of leading questions, Judd repeated the findings from the same CIS study. And he went on to say that the wall “will cut down on what the taxpayer burden will be, which will then go straight into funding the wall.” That’s an impressively delusional statement. Let’s try to follow his logic. What Judd is saying that taxpayers would be relieved from having to pay welfare benefits for illegal immigrants (we’ll set aside for the moment that there are no such benefits). But that tax revenues would instead be shifted to paying for Trump’s wall. So contrary to Judd’s comment, there is no reduction in the burden of the taxpayers at all.

Furthermore, Judd is conceding that it’s the taxpayers who are paying for the wall. So the lede in this story where Childers claimed that the wall would pay for itself was a lie. It would be paid for by the aforementioned taxpayers. And in that case, it would not be paid for by Mexico, as promised by the President. Judd called this “a brilliant way to go about it. And that’s the business strategy that President Trump brings to the American people.”

It’s rather ludicrous to characterize this idiocy as “brilliant.” But it’s pretty accurate to say that it’s characteristic of Trump’s business strategy. As a failed businessman who has declared bankruptcy at least six times, Trump can hardly qualify as a business expert. He is a practitioner if “Disaster Capitalism” (hat tip: Naomi Klein), who exploits his failures for his own gain at the expense of everyone he does business with. And as president, that means the American people are the chumps in his greedy game. And Fox News is his PR division that airs garbage like this interview in order to help Trump fleece the nation.

One thought on “Fox News Lies: Trump’s Border Wall Can Be Paid for By Cutting Welfare – Still Not By Mexico”