It had to come to this. The wingnut miscreants who suck up to Donald Trump have descended to the basest and most delusional fantasies their diseased imaginations can manufacture. It’s not enough anymore to merely smear American patriots as corrupt and dishonest. No, they are now envisioning perverse scenarios that are, in all likelihood, projections of their own psychotic defects. 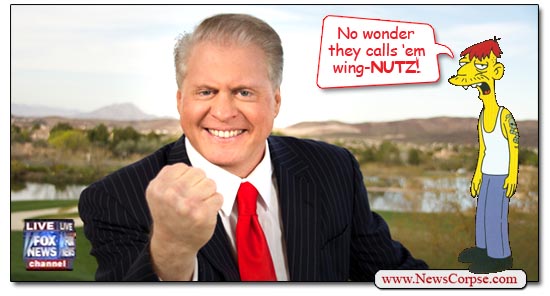 Wayne Allyn Root is a radio talk show host who resides on the outer fringe of the right-wing universe. He is also a frequent guest on Fox News and a contributor to their website’s editorials. And apparently he is also a sex-obsessed pervert with ludicrous ideas about the motivations of special counsel Robert Mueller. In a completely bonkers rant on Wednesday, Root attacked Mueller in the most disgustingly personal way imaginable. The tirade was triggered by news that the recent raid on the home and offices of Michael Cohen (Trump’s attorney) collected information regarding the now infamous Access Hollywood recordings of Trump bragging about committing sexual assaults.

This is just one part of the wide-ranging investigation into Trump’s improper and unlawful activities that include collusion with Russia, obstruction of justice, and financial corruption. But in Root’s mind it now comprises the whole of the inquiry. And unable to construct any rational arguments to defend Trump or support his demented theories, Root leaped head first into a totally made up story intended to malign Mueller. Here are a couple of excerpts from Root’s dementia courtesy of Right Wing Watch:

“Mueller is vicious, Mueller is disgusting, Mueller is a pervert. Can you imagine what he does at home at night? Who knows what he does, watching his computer images of Donald Trump and beautiful women. I can just guess what Mueller is doing in the dark, with the light of the screen glaring on him inside is office at 12 midnight..” […]

Root must have had assistants standing by to wipe the drool from his chin. He made a big deal about how women were drawn magnetically to Trump because he was so handsome and rich. Mueller, he said, was just a nerdy, penniless virgin. And it was that contrast that made Mueller so determined to get Trump.

It goes without saying that this is ridiculous in the extreme. It hardly deserves a response. But in the interests of correcting the record, here is the truth about Robert Mueller:

Mueller was born into a life of privilege, much the same as Trump. His father was an executive with DuPont. In school he was popular and admired. He was the captain of the soccer, hockey, and lacrosse teams. He married his childhood sweetheart and remained happily married for fifty-two years (and counting). He enlisted in the Marines and served in Vietnam where he was the recipient of the Bronze Star, two Navy Commendation Medals, the Purple Heart, and the Vietnamese Cross of Gallantry. And professionally he compiled a resume of achievement that included a law degree from the University of Virginia, being a U.S. Attorney, and the longest serving Director of the FBI.

Comparing that to Trump’s life of failure is way too easy. Trump inherited his wealth and did virtually nothing to increase it. To the contrary, he claimed bankruptcy half a dozen times. He never had a happy marriage (including the current one) and cheated publicly on all three of his wives. He dodged service in Vietnam with four academic deferments and a bogus claim of bone spurs. And unlike Mueller’s life of public service, Trump was in service only to his own greed, lust, and ego.

Root’s unhinged diatribe is emblematic of the Trump cult mentality so many of the President’s supporters suffer from. Sean Hannity is every bit as deranged and dishonest as Root. But it’s no wonder that these bootlickers have won Trump’s favor. Trump even thanked Root for his slobbering sycophancy on Twitter. They are clearly made for each other. And Root’s latest blathering is sure to give Trump some solace in these trying times preceding his imminent downfall. For a taste of Root’s madness, here is a video of part of Wednesday’s show – if you have the stomach for it: