The new book by former FBI Director James Comey is about to be released and details are being discussed in the press. The book, “A Higher Loyalty,” is sure to create a stir as excerpts reveal Donald Trump to be, as Comey says, “unethical, and untethered to truth.” While anyone paying attention the last of couple years already knows this, saying so publicly about a sitting president is unprecedented, especially coming from such a high government official. 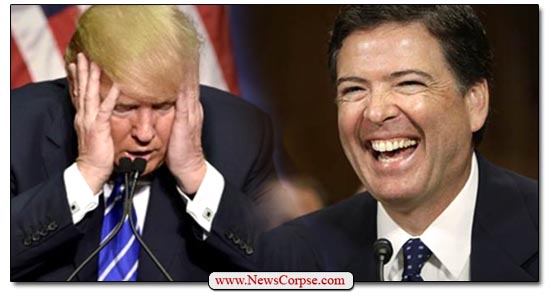 It was a foregone conclusion that Trump would be unable to refrain from reacting to Comey’s book. Furthermore, it was easy to predict that his reaction would be hostile, childish, and devoid of any factual basis. And Trump did not disappoint. On Friday morning he commenced his presidential duties by logging in to Twitter and posting some typically asinine attacks on Comey:

….untruthful slime ball who was, as time has proven, a terrible Director of the FBI. His handling of the Crooked Hillary Clinton case, and the events surrounding it, will go down as one of the worst “botch jobs” of history. It was my great honor to fire James Comey!

Being called a liar by Trump is like being called ignorant by – well, that’d be Trump too. The pissed off president is accusing Comey of serious crimes, which is not only false, but improper for an alleged commander-in-chief. He is prejudicing any potential jury pool with his blatantly biased opinion and personal animus.

However, what really sticks out like a sore, infected, and gangrenous thumb is Trump’s colorful assertion that Comey is an “untruthful slime ball.” He is clearly projecting a character flaw that he sees in himself. And he isn’t the only one who sees that. A new poll by ABC News/Washington Post asked “Who are you more likely to believe, Comey or Trump?” The results may cause Trump’s Diet Pepsi infused blood to go flat. According to the poll:

These numbers are similar to previous polls that asked the same question. Last June an NBC/Wall Street Journal poll found that by a 2-to-1 margin (45% to 22%), Americans said they are more likely to believe Comey than Trump. And just in case Trump dismisses these polls as being “fake” news, other polls show that voters also trust the media far more than they trust Trump.

Those saying that they believe Trump more represent his hard-core base that worship him as their cult leader. They don’t care if he’s lying, if he cheats on his spouse(s), if he breaks the law, or if he shoots someone on Fifth Avenue. Their messiah can do no wrong. Fortunately, the rest of America doesn’t agree. The ABC/WaPo poll asked about other matters related to investigations of Trump’s unsavory activities. By “yuge” majorities the public supports those inquiries and the work that special counsel Robert Mueller is doing:

“The public by a broad 69-25 percent supports Mueller’s initial thrust, to investigate possible collusion between Trump campaign officials and Russian government attempts to influence the 2016 election. Support extends to half of conservatives and more than four in 10 Republicans.

“Backing for Mueller’s work goes further: Americans by 2-1, 64-32 percent, also support his investigating Trump’s business activities. And by 58-35 percent, a 23-point margin, they support investigators’ latest apparent direction, looking at allegations that Trump’s associates paid hush money to women who say they had affairs with him.”

Trump ought to be more careful when calling other people slime balls. The mud he is throwing invariably splashes back on him. And he ends up dirtier than those he seeks to tarnish. It’s a familiar pattern that we can expect to see repeated as Trump’s problems exacerbate. He will predictably lash out with greater ferocity the closer Mueller gets to releasing his findings. Let’s hope that he can be constrained before he does anything even more stupid and destructive to our nation than what he’s done so far.