Donald Trump’s repetitious and hollow declarations that there was “no collusion with Russia” and “no obstruction of justice” have never had any substance to back them up. They were always the ravings of a frightened man exposing to the world his consciousness of guilt. And along with the spin by his sycophants in politics and punditry who insist that there is “no evidence” of any wrongdoing, he continues to stubbornly deny the reality that most Americans plainly see. 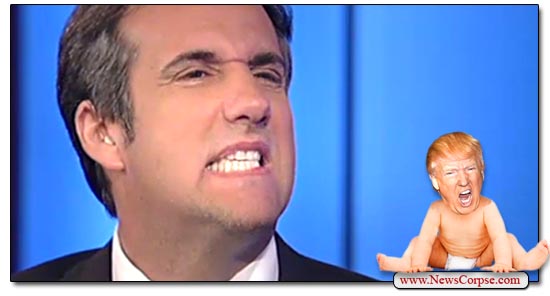 One of the most frequent claims from the Trump camp is now crumbling to dust. For months they have been castigating the Christopher Steele dossier, a document provided by a respected former British spy, as “fake” news. They pretend that none of it has been verified, even though much, but not all, of it has been. And they assert that the whole investigation by special counsel Robert Mueller should be terminated and discarded because it sprung from the “phony” dossier. For the record, the dossier was a small part of the justification for FISA court authorization of surveillance of certain Trump associates.

One of the claims in the dossier that had been vehemently denied was that Trump’s personal lawyer, and mob fixer, Michael Cohen, had traveled to Prague to meet with Russian operatives. Cohen was adamant that he was never there and tweeted a picture of the front of his passport to prove it. Although how the cover of a passport proves anything has yet to be revealed.

I have never been to Prague in my life. #fakenews pic.twitter.com/CMil9Rha3D

However, a new report by the McClatchy Washington, D.C. bureau undermines Cohen’s denials and asserts that contrary evidence is already in the hands of Mueller’s team. The article quotes sources who confirm his visit to Prague and his meetings with suspicious foreign characters. They include Konstantin Kosachev, an ally of Vladimir Putin who has since been sanctioned for meddling in the 2016 presidential election. Also present were hackers under the supervision of the Kremlin with access to the stolen emails of Hillary Clinton and John Podesta. If this article is true, Cohen has a lot of explaining to do. And not the least of his problems will be that he also made his denials in testimony to Congress which, if false, is a federal crime. The McClatchy story notes that:

It would also be one of the most significant developments thus far in Special Counsel Robert Mueller’s investigation of whether the Trump campaign and the Kremlin worked together to help Trump win the White House. Undercutting Trump’s repeated pronouncements that “there is no evidence of collusion,” it also could ratchet up the stakes if the president tries, as he has intimated he might for months, to order Mueller’s firing.

That looks pretty bad bad for Cohen, Trump, et al. And the article goes into significantly more detail about the meeting and the alleged conspirators. Cohen has responded to the story in a tweet that calls it “bad reporting” and claims that it was “proven” that he wasn’t in Prague. Of course, none of that is true and he offers no further proof. But if you were to press him him about the allegations that he actually was in Prague, he might just respond by asking his now famous question: “Says who?”