It’s been a bad year for Fox News. Donald Trump, the presidential figurehead they’ve been propping up for the past year, keeps swirling the legal drain on the way to the sewer of disgrace. Perhaps reflecting that downward spiral, Fox’s primetime ratings nosedived fifteen percent in February year over year. And while their revenue rose by about seventeen percent, that’s a pitiful performance when compared to their competitors: CNN’s rose thirty-two percent, and MSNBC rocketed up sixty-two percent. 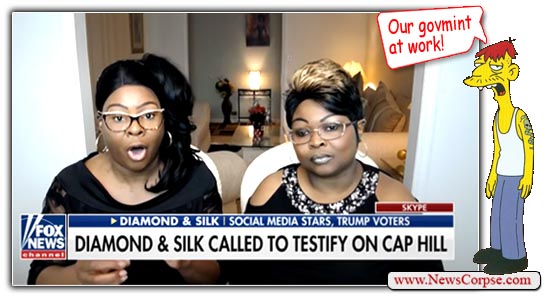 What’s more, the on-air “talent” at Fox News aint what it used to be. Bill O’Reilly was fired for repeated incidents of sexual harassment and abuse. Megyn Kelly fled perverts like O’Reilly for NBC. So now Fox has to rely on the smug, white nationalism of Tucker Carlson, the elitist bullying of Laura Ingraham, and whatever the hell Sean Hannity is. All three have been digging deeper into the conspiracy theory territory of crackpots like Alex Jones. Fox News has never been a haven for reputable journalists who took their jobs seriously. But their distance from credibility has lately grown to titanic proportions (in more ways than one).

There is no better indicator of that than the rise of two sisters from North Carolina, Lynette Hardaway and Rochelle Richardson, better known to Fox viewers as “Diamond and Silk.” After having made a name for themselves at Trump rallies (and being paid by his campaign to do so), D&S have become familiar faces on Fox News throughout the broadcast day. In recent weeks they have appeared on Fox and Friends, Watters World, the Ingraham Angle, and Cavuto. No Republican politician or pundit has had the blanket bookings that D&S have managed. Never mind that they have no discernible expertise in anything. They are brought on to opine about the economy, North Korea, immigration, healthcare, the legal intricacies of special counsel Robert Mueller’s Russia investigation, and more. This from a network that’s determined to strip away the First Amendment rights of socially active celebrities and athletes, and even student survivors of mass shootings.

Let’s not mince words here. These women are clowns. They appear in tandem to interject “amens” and “that’s rights” to augment whatever the other is saying. Their clothing, makeup, and accessories are straight from the Barnum and Bailey Collection. And their patter is strictly scripted to praise Donald Trump as America’s “Master” of Ceremonies. He even thanked them in one his numerous tweets about them. Some of the past D&S episodes on Fox include:

Recently, Cubic Zirconia and Sackcloth have been emitting high decibel whining on Fox News due to what they contend is a bias against conservatives by social media platforms like Facebook and Google. They are apparently ignorant of the recent changes by tech media to combat actual “fake” news and the efforts by hostile foreign nations to infiltrate and disrupt our media and democracy. D&S think that the audience decline being experienced by every online publisher is specific to them alone. Poor babies.

So these yammering yokels have been making the rounds on Fox News to complain that they are the victims of censorship. Typically, their complaints are front loaded with lies. But it’s just the sort of bullpucky that Fox hosts and viewers devour whole. As a result, their phony travails were even cited during the congressional hearings featuring Facebook boss Mark Zuckerberg. Five Republicans (Ted Cruz, Joe Barton, Marsha Blackburn, Steve Scalise, Billy Long) were duped into posing questions about D&S.

But if you think that was bad, wait until you see them testifying in person before Congress. That’s right, in an appearance on Fox and Friends Friday, D&S announced that they would be testifying about their imaginary conservative bias online at a House Judiciary Committee hearing next week. Has America really sunk this low? A couple of embarrassingly ridiculous bumpkins, with no experience in anything but ranting annoyingly, are about to be interviewed by our representatives in Washington.

Diamond and Silk are being accorded a measure of respect by Republicans in Washington they haven’t earned and don’t deserve. But then that’s exactly what Fox News has been doing for months. They’ve gone from tantrum throwing political rage-a-holics like Sean Hannity to these insipid, half-witted nobodies. It’s a clear sign that the direction Fox News is heading is for ever lower respect for intelligence and reality-based journalism. In other words: Same as it always was.

Update: D&S had their day on Capitol Hill and predictably embarrassed themselves and the Republicans who invited them to make a circus of Congress.

One thought on “SRSLY? On Fox News Loopy Trump-Fluffers ‘Diamond and Silk’ Pass For Legitimate Journalists”