In the past fifteen months Donald Trump has provided abundant evidence that he is an unqualified fruitcake with crackpot tendencies. His mental health has been plausibly questioned by professionals in the psychiatric field. Much of that evidence came straight from his speeches and the few interviews he has given to friendly media. But on Thursday morning on Fox News he really outdid himself. 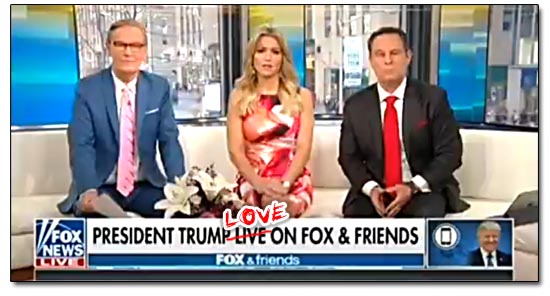 Trump was actually returning to his roots with a call-in interview on Fox and Friends, Prior to seeking the presidency Trump had a regular spot on the program called “Mondays with Trump.” So with this homecoming he should have been expected to feel comfortable with the “Curvy Couch” potatoes who helped launch his political career. The problem is that he may have felt too comfortable.

This was not so much an interview as a half hour of unbridled lunacy, with Trump lashing out at every perceived enemy that came to mind. He blasted Hillary Clinton, Barack Obama, James Comey, the Justice Department, Democrats, the Mueller investigation, and, of course, the “fake” news. If he were a transient on a downtown corner spouting off like this he would have been picked up and taken to the nearest psyche ward. It was an unprecedented and frightening spectacle.

The entire segment is worth watching if you have a strong stomach. In parts he admitted to previous lies, like how long he was Russia. He also contradicted a prior statement about his knowledge of Michael Cohen’s hush money payout to Stormy Daniels. In fact, pretty much played the “Michael who?” card by saying that the man who has been his personal attorney for years did very little legal work for him. It took federal prosecutors just a couple of hours for that statement to become testimony in pending litigation. And Daniels’ attorney, Michael Avenatti, reacted gleefully to the interview by saying that “I think the President should appear on Fox and Friends every morning.”

Perhaps the loopiest part of this unhinged departure from sanity was when Trump went on an extended rant against the media. It was a sight to behold. Equal parts hostility toward legitimate journalists and unswerving devotion to Fox News. This is incontrovertible proof that Trump and Fox have sworn a blood oath of loyalty (video below):

Trump: The people have to understand how dishonest the news is. And in all fairness to Fox, you guys don’t always treat me great. But you treat me fairly. It’s not like Fox is perfect for me. They’re not. They’re tough. But at least it’s fair. When you look at some of the others, you look at CNN, they’ll have a council of seven people, and of the seven people, every one of them is against me. I’m saying where do they even find these people?
Kilmeade: I’m not your doctor Mr. President, but I would recommend you watch less of them.
Trump: I don’t watch them at all.
Doocy: That makes it easy.

Trump thinks that Fox News is tough on him? No wonder he won’t be interviewed by anyone else. He’s frozen with fear of real questions that would require intelligence and thoughtful analysis to answer. That’s why he has not had a solo press conference in over a year. And he hasn’t given an interview to an unfriendly network in nearly as long.

It’s startling that he thinks that CNN’s political panels are all anti-Trumpers. Apparently he missed the sycophantic stylings of Jason Miller, Paris Dennard, Jack Kingston, Kayleigh McEnany, Ken Cuccinelli, Mike Shields, Ben Ferguson, etc. I’m also saying “Where do they even find these people.” And it’s cute that Brian Kilmeade suggests that Trump watch less of CNN and, presumably, more of Fox. But Trump seems to be way ahead of him. However, his assertion that he doesn’t watch CNN at all flies in the face of his own comments.

Trump: I watched last night, I tell you why. I watched leakin’, lyin’, Comey last night, and I hated to do it. You know, one of the reasons people say “You’re still lookin’ good, Mr. President. How do you do it?” Well, one of the things I’ve been able to do, which is something I never thought I had the ability – I would always watch – when I was – frankly now I don’t have time for two reasons: There’s too much, and I don’t have time.

Trump seems to believe that if the entertainment division of a media corporation earns money from his program, the news division is obligated to report only positive stories. Like everything else in Trump’s life, he thinks he can just buy the kind of coverage he wants. And the Fox News hosts didn’t disagree with him.

Trump: But just one thing, I don’t watch things that I can put it out of my mind. And I never, ever thought that that would be possible. And you know what that does? It keeps you on the ball. It keeps you – you keep your sanity. And it works very well. But last night I did watch a liar, leaker and his performance, by the way, was horrible.

Somewhere in this word salad of Trumpian blathering he thinks he represents a sane man simply observing the media. Or not doing so, as he is now insisting. He even expects people to believe that he can put negative news out of his mind. And if this interview is supposed to be an example of that, he really is out of his mind.