The flagrant racism of Donald Trump and his cult congregation of glassy-eyed Republicans and wingnut pundits continues to sink ever further into the abyss. On Friday we saw the repulsive spectacle of a Fox News host, Brian Kilmeade, defend Trump by saying that the kids being separated from their families were just foreigners who we can blithely disregard. “Like it or not,” Kilmeade said, “these aren’t our kids. Show them compassion, but it’s not like he’s doing this to the people of Idaho or Texas.” Get it? This would only be a real problem if the kids were from Idaho. 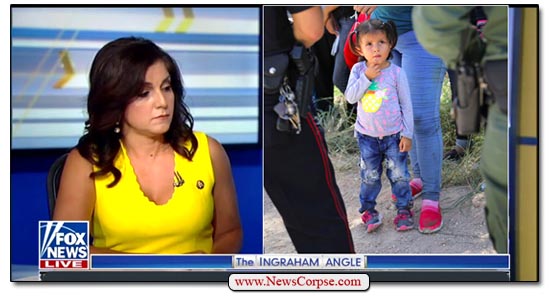 On a day when there are still a couple thousand children being held hostage by Trump’s government, the President held an event at the White House to talk about Americans killed by immigrants. Never mind that there are far more Americans killed by Americans who Trump never bothers to show any sympathy for. Including children at schools like Marjory Stoneman High whose white, Christian murderer is an American citizen. Trump never invited the parents of those victims to the White House.

Fox’s Laura Ingraham has been a reliable spokesperson for the cretins who think that ripping babies from their mothers’ arms is a justifiable form of border security. She recently dismissed the thought of any harm inflicted on the immigrant children by saying that their detention facilities were just like “summer camp.” If she attended summer camps like that it might explain how her mind got so twisted and callous.

On Ingraham’s Thursday program she interviewed Fox News contributor Rachel Campos-Duffy, who expressed an opinion that is surely widely held among conservative dirtbags. In an attempt to minimize the horror experienced by a kidnapped child, Campos-Duffy compared their incarceration to the conditions at many inner city housing communities (video below):

However, Campos-Duffy just proved that not only are some people stupid, they are also nauseatingly heartless. It is mindnumbingly idiotic to compare urban housing to forced internment camps for children stolen from the loving care of their parents. Campos-Duffy apparently cannot comprehend the terror of a lost child who is being held by strangers who provide no comfort or care. That’s the sort of experience that can literally scar a child for life.

But Campos-Duffy made another point that she is certainly too dense to notice. She inadvertently pointed out the inhumane conditions at some of the “projects” where low income Americans live. She’s admitting, without realizing it, that those living conditions are extraordinarily harsh and that it is shameful that a nation as wealthy as the United States would permit it. That’s something that is not talked about enough in the media, especially the conservative media that Campos-Duffy calls home.

Nevertheless, the comparison is still horribly wrong. To be sure, there are hardships for low income families living in impoverished, and sometimes dangerous, neighborhoods. But they are living there with their families, friends, and other sources of support from the community. They are not minor prisoners in a state facility without parental companionship or security. And the fact that Campos-Duffy and her Fox News cohorts can’t see the difference is a sad testament to their inhumanity.

Fox News' Rachel Campos-Duffy: "I spoke to some African-Americans who say, 'Gosh, the conditions of the detention centers are better than some of the projects that I grew up in.'" pic.twitter.com/nQ1Lx5qMwl