The Republican Party has officially transformed into the Party of Trump. They blindly follow his every word and deed. They pass laws that are tributes to his ignorant worldview. They obstruct any attempt to seek out the truth in matters that may end up reflecting negatively on the President. And they tremble at the thought of arousing his wrath. 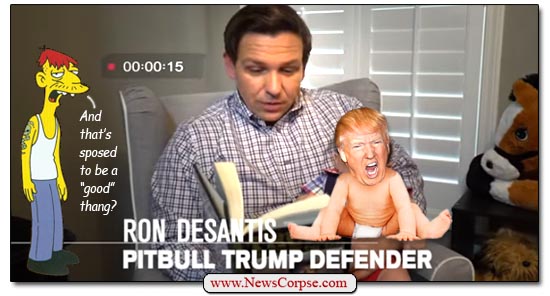 In the Florida governor’s race Ron DeSantis is the Trump-endorsed candidate who mirrors Dear Leader like a shaggy dog’s reflection in a puddle. He is among those for whom Trump has posted one of his infamous robo-tweets that all sound like endorsements for Stepford Republicans. But a recent DeSantis ad featuring his wife and child really struck a tone of Trump worship that is beyond imagination. See for yourself:

In this ad Ms. DeSantis performs what would be a hysterical Saturday Night Live satire of a Republican ad. It’s too bad the ad is all too real. She begins by pointing out that her husband is already well known as a Trump flunky. Why on Earth would anyone regard that as a positive image? Then she rambles through a series of Trumpian cliches (“build the wall,” “you’re fired,” “make America great again”) as if that would put some distance between DeSantis and his Messiah. And she closes by facetiously saying that people are wrong to think that DeSantis is “all Trump,” despite that being the entire theme of the ad.

This ad is allegedly a humorous take on the candidate’s emphatic embrace of the President. However, it still articulates a single message to viewers: Ron DeSantis has no agenda other than fluffing Trump. He doesn’t advocate a single issue that might be of importance to Floridians. He doesn’t even try to explain why he’s so infatuated with Trump. It’s just a blind, unquestioning love that is indisputable and all-consuming.

And that’s the whole point of this ad, as well as the whole mythology behind Donald Trump and his rise to power. Despite his innumerable flaws (infidelity, dishonesty, financial incompetence and corruption, racism, treason), he must be loved simply because he demands it. And when he tells you to drink the cyanide-laced Kool-Aid (or to assault a liberal, or a person of color, or a journalist), your only permitted response is “Yes, Master. I will obey.””