Last month Donald Trump told Sean Hannity that he would go on the road for Republican candidates “six or seven days a week when we’re sixty days out.” So in effect, he’ll be taking a leave of absence from the presidency to become a full-time campaign shill. Never mind that he’s supposed to be doing president stuff, the American people are mostly relieved when he goes golfing, or otherwise refrains from doing more harm to the nation. A new poll shows his disapproval at a record high of sixty percent. 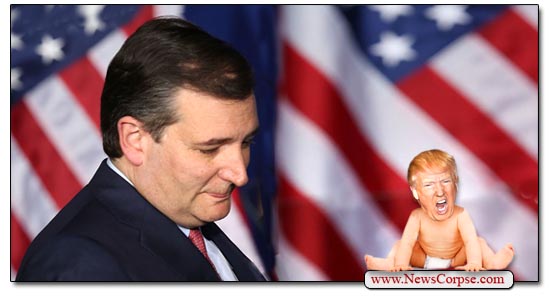 Trump has already done a couple of dozen of these purely partisan Klan gatherings that require him to assemble his staff and security detail to venture from Washington on the taxpayer’s dime. That’s about three times a month that Trump is doing his Dogged Phony show before the Confederacy of Deplorables. And on Friday morning he revealed a new stop on the StormTrumpers Tour: The great state of Texas will be honored with Trump’s presence on behalf of Sen. Ted Cruz.

I will be doing a major rally for Senator Ted Cruz in October. I’m picking the biggest stadium in Texas we can find. As you know, Ted has my complete and total Endorsement. His opponent is a disaster for Texas – weak on Second Amendment, Crime, Borders, Military, and Vets!

For the record, these two have not exactly been BFFs. So this public embrace is an obvious bend toward desperation for them both. Trump famously charged that Cruz’s father was a co-conspirator in the assassination of John Kennedy. He lifted that from the National Enquirer, published by his pal David Pecker, who was recently granted immunity to testify against Trump. The President also insulted Cruz’s wife as not meeting his porn star standard of beauty. In response, Cruz accurately called Trump out (deliciously vicious video below) for being a “pathological liar” and “utterly amoral.” But for a preview of what we might expect at the Texas Revival Meeting in October, here is what Trump said about Cruz not very long ago:

Lyin' Ted Cruz is now trying to convince prople that his problems with The National Enq.were caused by me. I had NOTHING to do with story!

.@LindseyGrahamSC and Lyin' Ted Cruz are two politicians who are very much alike – ALL TALK AND NO ACTION! Both talk about ISIS, do nothing!

Why would Texans vote for "liar" Ted Cruz when he was born in Canada, lived there for 4 years-and remained a Canadian citizen until recently

Ted Cruz lifts the Bible high into the air and then lies like a dog-over and over again! The Evangelicals in S.C. figured him out & said no!

Ted Cruz only talks tough on immigration now because he did so badly in S.C. He is in favor of amnesty and weak on illegal immigration.

How can Ted Cruz be an Evangelical Christian when he lies so much and is so dishonest?

A couple of things stand out in those Twitter diatribes. First of all, Trump makes a point of questioning why any Texan would vote for a lying, do-nothing, foreign-born cad like Cruz. That’s a good question. Secondly, he goes to great lengths to characterize Cruz as a hypocrite for staking out a claim of religiosity despite his uncontrollable tendency to lie. Sound familiar? Trump and Cruz are cut from the same sackcloth. And this is the man that Trump now says has his “complete and total Endorsement.” Well, that figures.

Trump also made a point of maligning Cruz’s opponent for the senate seat. Beto O’Rourke has organized an historic campaign that is still gaining strength. The latest poll shows O’Rourke and Cruz in a virtual dead heat. It’s safe to say that all the Cruz supporters in Texas are already accounted for. Which means that turning out new, younger, and more diverse voters will be the deciding factor in this race. And considering that Cruz is the most hated man in Washington, and that all the momentum is on O’Rourke’s side, Trump’s travelling salvation show might just be the final curtain for Lyin Ted.