The only thing worse than having Donald Trump gallivanting off to his luxurious golf resorts every weekend is having him in the White House doing more harm to the country. He has already spent about thirty-one percent of his presidency (175 days) at Trump owned properties like Mar-A-Lago. It’s an unprecedented negligence of duty for the alleged Commander-in-Chief, but a welcome relief to the nation and, most likely, the long-suffering staff at the White House. Now if we could just get him to stop tweeting as well. 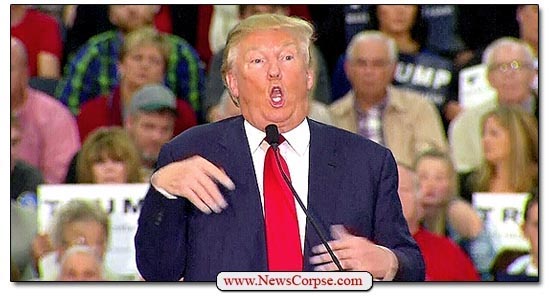 In addition to his vacation getaways, Trump is a frequent flyer on Air Force One to political events across the country. On Friday he posted a message on Twitter announcing that he will be appearing at a tremendous gathering of his true believers in Tampa Bay, Florida next Tuesday. That will mark his twenty-third purely partisan revival meeting this year alone. That averages out to three times a month that the President has assembled his staff, security detail, and transportation crews to venture from Washington on the taxpayers dime, delivering nakedly partisan speeches to adoring throngs of Deplorables. These are expensive excursions that every American is footing the bill for. While some costs are reimbursed by Trump’s campaign committee, the trappings of the presidency are borne by us hard working rubes, most of whom voted for Hillary Clinton. And if you want to know what Trump thinks about forcing this financial burden on regular folks, just refer back to his tweets on the subject when Barack Obama was President:

Taxpayers are paying a fortune for the use of Air Force One on the campaign trail by President Obama and Crooked Hillary. A total disgrace!

Why isn't President Obama working instead of campaigning for Hillary Clinton?

On Friday Trump had a surprise phone-in interview with his shadow chief of staff, Sean Hannity. Among the things they discussed were the upcoming midterm elections. Most prognosticators are predicting a massive Blue Wave that will sweep the Democrats back into the majority in the House of Representatives, and perhaps the Senate as well. But Trump has a different opinion. He believes that the power of his personality will shock the experts and produce a glorious Republican victory. Who knows? Maybe he’s right. And no Democrat should get complacent about winning given the unpredictable nature of this electorate. But in the furtherance of his goal, Trump told Hannity (at about 26:05) that “I am going to work very hard. I’ll go six or seven days a week when we’re sixty days out.”

So what he’s saying is that he’s going to take a leave of absence from the presidency to become a full-time campaign shill. This isn’t really new. Last December his people said that he intends to spend more time campaigning. But this does present some problems. Does he think the country will just wait around for two months until he’s through politicking and returns to the Oval Office to see if he has any messages? Will Vlad know where to reach him? And when, for the love of God, will he have time for golf?

Why he needs to take these measures is puzzling. His rallies to date have been carbon copies of each other where he does and says virtually the same thing every time. It’s just like his Twitter endorsements of GOP hopefuls that are veritable robo-tweets on behalf of interchangeable Stepford Republicans. And for the most part, he’ll talk more about himself than the the candidate he’s suppoedly there to support. But he will play all the hits (“Crooked Hillary, Build the Wall,” and the epic “Witch Hunt”) while castigating the ever-present media as “the enemy of the people.” These affairs are so mindlessly repetitive that they could be performed with a mannequin and tape loops. And his glassy-eyed disciples wouldn’t know the difference.

However, at least the country will know where he is and that he won’t be able to do as much damage as he would while playing president and barking orders from the big chair in the Oval Office. And he won’t be cozying up to foreign dictators and selling out the country to our enemies. Of course, he could still relay messages to them from the stump, and they would be listening while waging another cyber war against America during an election. So we’ll have to alert wherever he is. Because we know that Trump and his lackeys won’t be.

One thought on “Good News: Trump Promises to Ignore His Job for 2 Months to Campaign for Republicans”