The ongoing spectacle of the collapse of common sense within the Republican Party seems to be accelerating with each new day and each new preposterous outburst by some GOP ignoramus. The ignoramus in question is most frequently the one who occupies the White House, but Donald Trump can’t hog the glory entirely, much as he may want to. 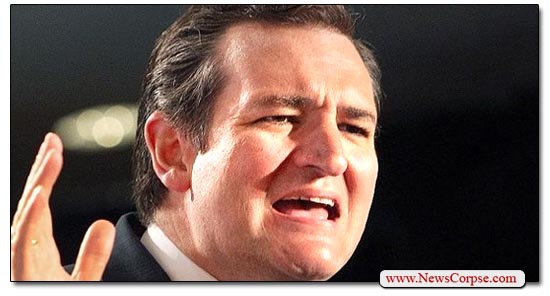 Texas Senator Ted Cruz isn’t about to sit back and let someone else get all the attention for being America’s most flagrant disseminator of lies and misinformation. Cruz has worked too long and hard to make a name for himself in this field of assholery. So in an effort to recapture the recognition that he feels he deserves, Cruz gave a speech in Humble, Texas, about the evil agenda being advanced by his opponent, Beto O’Rourke, that included this brilliant campaign promise:

So Cruz is appalled that Democrats want Texas to be “just like California” (the most prosperous state in the country) “right down to tofu, silicon, and dyed hair.” But he’s not having that “on our watch.” Which makes you wonder if he’s ever been to Texas, or gives a damn about it.

Let’s start with tofu. This much maligned product is actually enormously popular in the United States and around the world. It’s made from soybeans which is now the largest cash crop in America, surpassing the previous king of the farming hill, corn. It accounts for billions of dollars in revenue. Unfortunately, much of that is being threatened by Trump’s ill-advised tariffs aimed at China. And Texas itself produces more than 6.84 million bushels a year. What must Texan farmers think of Cruz’s attack on their businesses? Fun Fact: Whole Foods is headquartered in Texas.

As for silicon, Austin, Texas is the home of Dell Computers, the third largest PC manufacturer in the world. It’s also the largest private company in Texas by revenue. Of course, they aren’t alone. Many other nationally prominent computer related business call Texas home, including Texas Instruments and GameStop. And giants like Apple, Cisco, and Google all have regional offices in the state. Perhaps Cruz was thinking of silicone as what he wanted to keep out of Texas. That would cause significant harm to Hollywood, but also make a lot of cowboys really mad. And would Melania be prohibited?

Cruz’s vicious and unprovoked assault on dyed hair is the most peculiar items on his list of evils invading the state. First of all, it presupposes that there isn’t already lots of dyed hair in Texas. And that isn’t limited to the punk rockers that he was probably inferring. It also includes much of their blonde population and, therefore, almost every woman who works for Fox News. And it includes men of a certain age as well, and probably Cruz himself. So what, exactly, is his point?

This campaign tactic seems destined to fail. Not only does it hurt the Texan economy, it makes Cruz out to be both ignorant and out of touch with his state – and reality. It reaffirms many of the reasons that he is regarded as so unlikeable and the most hated man in Washington. And juxtaposing that with the charisma and magnetic personality of Beto O’Rourke can only be a further, and serious, detriment to the Cruz candidacy. It might be the worst thing that Cruz could have done after his inviting Donald Trump to come to Texas to hold a rally for him. That should be fun considering what these two have said about each other over the past couple of years. For instance:

7 thoughts on “Ted Cruz’s Idiotic Anti ‘Tofu and Silicon’ Platform Will Destroy the Economy of Texas and America.”