You have to hand it to Donald Trump. He is never satisfied with holding the world’s record for lying to the American people. He’s already received the honor of being awarded PolitiFact’s Lie of the Year – twice. First in 2015 for his collective campaign “misstatements.” Then again in 2017, for his repeated denials of Russia’s interference in the presidential election. In 2016 PolitiFact’s Lie of the Year went to “Fake News,” so you might say that Trump deserved a share of that as well. 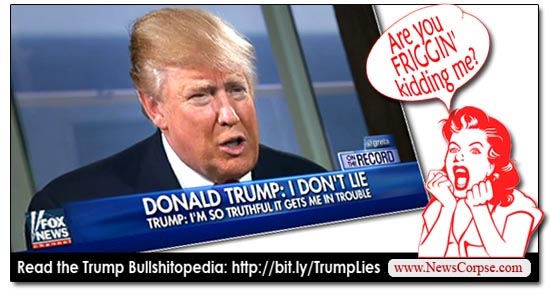 But now Trump is soaring to new heights in his ability to distort and dishonor the truth. Daniel Dale of the Toronto Star has been documenting Trump’s lies and is now reporting that the total number of presidential fabrications in August surpassed those in July, setting a new record of 321 for the month. Here are some examples of the most recent White House whoppers:

“The ABC/Washington Post Poll was by far the least accurate one 2 weeks out from the 2016 Election. I call it a suppression poll – but by Election Day they brought us, out of shame, to about even. They will never learn!”

“We withdrew from the horrible Paris climate accord. It sounds so pretty. It was gonna cost us a fortune and it was going to put us at a tremendous disadvantage — and we have cleaner air now than anybody.”

“Four million jobs created since the election. That’s unheard of. Nobody thought that was possible.”

“The hottest industry there is right now is the steel industry, and it was dead as a doornail. We were not going to have a steel industry in a couple of years from now had we not done what we did.”

“The advantage we have is — I am actually a very popular president, which people don’t like to say, you know.”

“There was no collusion. I think almost everybody, even in your business, is saying there just is no collusion. There were no Russians. If there were, you would have known about it. There was collusion between the Democrats and the DNC and Russia.”

“What’s going on at @CNN is happening, to different degrees, at other networks – with @NBCNews being the worst. The good news is that Andy Lack(y) is about to be fired(?) for incompetence, and much worse. When Lester Holt got caught fudging my tape on Russia, they were hurt badly!”

“Hillary Clinton’s Emails, many of which are Classified Information, got hacked by China. Next move better be by the FBI & DOJ or, after all of their other missteps (Comey, McCabe, Strzok, Page, Ohr, FISA, Dirty Dossier etc.), their credibility will be forever gone!”

“Google search results for ‘Trump News’ shows only the viewing/reporting of Fake News Media. In other words, they have it RIGGED, for me & others, so that almost all stories & news is BAD. Fake CNN is prominent. Republican/Conservative & Fair Media is shut out. Illegal?”

“You know, they kept saying I had a problem with the women’s vote; I get 52 per cent in the election. I did OK. I did OK.”

“Michael Cohen plead guilty to two counts of campaign finance violations that are not a crime.”

“We’ve also come and, you know, once you get rid of the individual mandate, which we’ve done, that really was the end of Obamacare.”

“California wildfires are being magnified & made so much worse by the bad environmental laws which aren’t allowing massive amount of readily available water to be properly utilized. It is being diverted into the Pacific Ocean.”

“I’ll tell you what: Russia’s very unhappy that Trump won, that I can tell you.”

All of these statements are documented, bona fide lies. And if that’s not enough, the Toronto Star has over 300 more. We have a president who can’t seem to say anything without falsifying it. Even unimportant things where there is no discernible gain from lying. It’s a disease. But, unfortunately, it’s the nation that is suffering. And it will continue until we cast this deceiver from his perch. And that cannot come too soon.

2 thoughts on “Our Pathological-Liar-in-Chief, Donald Trump, Just Beat His Own Record for Lying – Again”