One of the most fascinating aspects of Donald Trump’s dementia is how he frequently expresses something that has the effect of contradicting his intention. He did this recently in a tweet about his “witch hunt” delusion that actually affirmed it. And he did it again in a rant about the anonymous New York Times op-ed that validated the article’s warnings about his unfitness to serve. 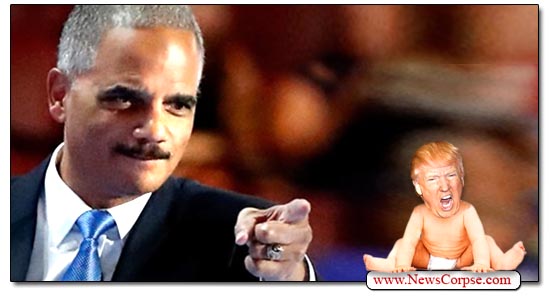 Well, he’s done it again. On Tuesday morning, when the rest of America was deep in remembrance of the victims of 9/11, Trump decided he would go after his own Justice Department. And he did so with what he must regard as the worst possible indignity he could muster: comparing it to Obama’s Justice Department:

“ERIC Holder could be running the Justice Department right now and it would be behaving no differently than it is.” @LouDobbs

On the surface, what Trump is implying is that his Attorney General, Jeff Sessions, was no better than his predecessor, Eric Holder. But this attempt at insulting Sessions could be interpreted another way. Trump might be saying, inadvertently of course, that the Justice Department is operating exactly as it should be. A change in administrations ought not to alter the mission of the agency, which is to be a nonpartisan seeker of facts and accountability for wrongdoing. So it should, in fact, not be any different under Sessions, than it was under Holder.

Trump, however, is wholly incapable of understanding anything as principled and anchored by ethics as that. What he was aiming at was the refusal of Sessions to turn the department into his own Office of Personal Persecution. Trump is livid that Sessions won’t lead an inquisition against Hillary Clinton and other Democrats who Trump, in his paranoid haze, believes are conspirators in a “Deep State” plot to dethrone him.

As for Holder, he noticed Trump’s harangue at Sessions and observed some differences between the current DoJ and the one that he led. Holder tweeted in response to Trump:

Really?! My DOJ would and did care. And continue to fight for protections for voting rights, health care, climate, LGBTQ rights, gun safety measures, criminal justice reform. Would stand up to Congressional hacks and for the career people at DOJ. Are you and Crazy Louie nuts? TFA https://t.co/vxBP2oZX5e

Indeed, Holder took his responsibilities seriously as the nation’s top law enforcement official. He dedicated his service to advancing the rights of all Americans and bringing criminals to justice. His closing acronym, “TFA,” was a reference to the 25th Amendment that provides for the removal of a president who is incapable of carrying out his duties.

Finally, Trump’s tweet was his second of the morning that quoted Lou Dobbs, the Fox News hack who is so infatuated with Trump that he signs most of his own tweets with the hashtags #MAGA and #TrumpTrain. Nothing like being fair and balanced. The other Dobbs quote posted by Trump said:

“We have found nothing to show collusion between President Trump & Russia, absolutely zero, but every day we get more documentation showing collusion between the FBI & DOJ, the Hillary campaign, foreign spies & Russians, incredible.” @SaraCarterDC @LouDobbs

Needlass to say that is 100% false. There are mountains of evidence that connect Trump directly to Russia and people close to Vladimir Putin. And there is literally nothing that connects Clinton to Russia except for the partial funding of the Steele Dossier, which included sources that were Russian dissidents, not Kremlin operatives. That’s a huge difference.

All of this underscores the differences between what Eric Holder sees as an honest Justice Department and what Trump thinks should be an agency that is obedient to his tyrannical rule. Fortunately, that perverse vision isn’t being carried out – yet. But with Trump threatening to fire Sessions after the midterm elections, who knows.

4 thoughts on “TFA: Eric Holder Slams Trump and Lou Dobbs of Fox News for Ignorant Tweet About the DOJ”