Leave it to Fox News to find the bright side of slave owners. While the rest of the civilized world condemns human trafficking, the “Curvy Couch” potatoes of Fox and Friends managed to produce a segment that highlighted the freedom loving Confederates on the old plantations of Dixie. 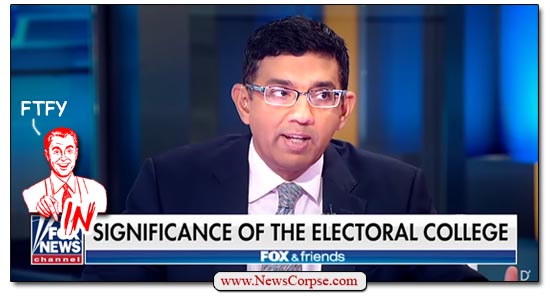 Co-host Steve Doocy interviewed one of Fox’s favorite shameless disseminators of flagrant lies, confessed felon Dinesh D’Souza. Earlier this year Donald Trump pardoned D’Souza for the federal crime that he had pleaded guilty to. The Fox segment began as an attempt to mock Democratic congressional candidate Alexandria Ocasio-Cortez for what they asserted was a gaffe. It wasn’t. She tweeted that:

It is well past time we eliminate the Electoral College, a shadow of slavery’s power on America today that undermines our nation as a democratic republic. https://t.co/00HZN3MI6F

Ocasio-Cortez was replying to a tweet that noted that two recent presidents who lost the popular vote have put four justices on the Supreme Court. Doocy then asked D’Souza “Why does the Electoral College matter,” and “what do you think she was talking about?” D’Souza’s reply began by mansplaining what Ocasio-Cortez really meant (video below):

“Well, first of all, I think she’s confusing the Electoral College with the “three-fifths” laws. The three-fifths laws was about slavery, and it had to do with an argument between the North and the South over representation. Ironically, the North, which was the anti-slavery side, wanted blacks to count for zero because they wanted to reduce the representative power of the slave states. The South wanted blacks to count for a full person. So the three-fifths laws which was usually presented to show that the founders didn’t consider blacks to be fully human, doesn’t actually show that at all.”

D’Souza is almost right. The problem is that he leaves out the fact that the South only wanted to count slaves because it gave the region more clout in the federal government. Slaves would still be denied any rights and considered to be property. The South wanted it both ways: to own blacks like chattel, but count them to increase the political power of their white masters. Then D’Souza swung back around to the Electoral College:

Once again, D’Souza os only partly correct. Much of the dispute between the large and small states was still a matter of north and south. The population of the North far exceeded that of the South. So Ocasio-Cortez was correct in associating the Electoral College with slavery. What’s more, D’Souza is wrong in stating that smaller states would be unrepresented without the Electoral College. Their representation in Congress would be identical. The only difference would be in presidential elections.

However, that difference has become a useless and undemocratic anachronism. Given the boundaryless mobility of the modern U.S., we should not still be electing the president by states, but rather by voters. There is no coherent reason why the tiny populations of Idaho or Wyoming should have a greater say in presidential elections than the vastly more numerous populations of California or Texas. And it’s fair to say that there are a lot of former residents of Idaho and Wyoming who now live in California and Texas. Should their votes be diluted simply because they moved?

Ocasio-Cortez is right to raise the issue of eliminating the outdated Electoral College. It should have been done long ago. Hopefully her colleagues in Congress join her in that initiative when she gets there in January. In the meantime, Fox News needs to stop hosting racists who talk down to women and demean them personally as incapable of grasping these issues. But then they would have hours and hours of dead air.