This may be one of the most disgraceful, nauseating things Donald Trump has ever said. Of course, that sentence could have been written a thousand times over the past two years. And it will surely be written again in the future. But for right now this is the moment to be repulsed by what an abhorrent creature is inhabiting our White House. 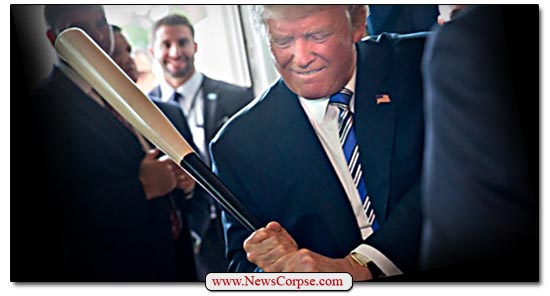 At another one of Trump’s now frequent cult rallies, our Cretin-in-Chief took a moment to promote the campaign of Greg Gianforte for Congress. For those who don’t recall, Gianforte is the Republican representative who attacked a reporter who had the audacity to ask him a question about the campaign. Gianforte later pleaded guilty to the assault. But none of that persuaded Trump to hold back in his effusive support for Gianforte’s reelection. Trump even lauded the assault (video below):

“Any guy who can do a body slam, he’s my guy. I shouldn’t say this because – oh there’s nothing to be embarrassed about. […] I had heard that he body-slammed a reporter. [crowd cheers] And he was way up. And I think this was like the day of the election or just before. And I said ‘Oh, this is terrible. He’s gonna lose the election.’ Then I said wait a minute. I know Montana pretty well. I think it might help him. And it did.”

This would be an appalling comment under any circumstances. But coming so soon after the barbaric murder of a journalist at the hands of Trump’s Saudi friends, it is damn near unthinkable. Has Trump already forgotten about the murdered journalist Jamal Khashoggi, a United States resident with four children, three of whom are American citizens? Is he so enamored of the tyrannical privileges of his foreign dictator pals that he’s trying to emulate them? Or is he just this unbelievably loathsome? And what are we to make of the cheering from the audience of glassy-eyed Deplorables who think this is appropriate?

Whatever the explanation, the result can only be a signal to all other despotic leaders who aspire to assassinate troublesome journalists. Trump is sending an unmistakable message that he isn’t going to respond to such hostility. In fact, he clearly approves of it. And the blood of any other journalists – abroad or at home – is on hands. At least we know that he really means it when he says that the media is “the enemy of the people.” And therefore, in his warped mind, they can be assaulted and even murdered without consequence.

One thought on “Khashoggi Who? Trump Delivers Disgusting Praise for Montana Rep Who Assaulted Reporter”