Friday morning there was good news out of Florida regarding the MAGABomber. Authorities have confirmed that a suspect, Cesar Sayoc, Jr, is in now custody. He is described as a Florida resident with ties to New York and a criminal past. And while that sounds a little like Donald Trump, it’s actually just a like-minded supporter with pro-trump, anti-media stickers plastered over most of his van. Now who would ever have guessed that? 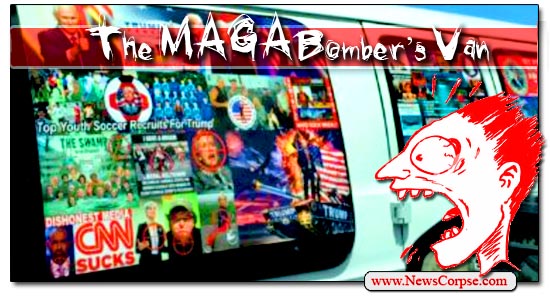 Meanwhile, Trump himself spent the morning whining profusely about the sorry state of America and how everyone in it is out to get him. His latest tweetstorm is a prime example of the narcissism fueled state of rage that he is in virtually all the time. He began with this bit of crybaby bawling:

Funny how lowly rated CNN, and others, can criticize me at will, even blaming me for the current spate of Bombs and ridiculously comparing this to September 11th and the Oklahoma City bombing, yet when I criticize them they go wild and scream, “it’s just not Presidential!”

Apparently Trump is furious that the media can criticize the President “at will.” They didn’t even have to get official permission from the White House. What do they think this is? A democratic republic with a free press, or something? And the only reason that anyone blames him for the “current spate of bombs” is because he’s demonstrably responsible. Trump’s relentless and reckless attacks on his political opponents and the press have created an atmosphere that emboldens fringe characters like Sayoc. Trump complains that he is called “unpresidential” for criticisms. But the reality is that his criticisms are overtly hostile and explicitly advocate violence.

The next tweet shows just how unhinged Trump has become with regard to how the media has been reporting this domestic terrorism. Trump believes that it’s all about him and a plot to damage his presidency and the Republican prospects in the midterm election:

Republicans are doing so well in early voting, and at the polls, and now this “Bomb” stuff happens and the momentum greatly slows – news not talking politics. Very unfortunate, what is going on. Republicans, go out and vote!

Trump leads off by gaslighting the nation with phony assessments of the state of the Republican campaign. If anything, the early voting is benefiting Democrats, as is the massive fundraising advantages that Democrats are enjoying. So Trump resorts to belittling the domestic terrorism by his supporter as “this ‘Bomb’ stuff.” It’s downright sickening that Trump’s reaction to mail bombs being sent to prominent Americans is to whine about the political ramifications, rather than the threat to human lives.

Furthermore, Trump’s complaint about a news story distracting from the election is absurd and hypocritical. He’s been demagoguing about the Central American refugees for weeks now, in an effort to influence his base of cult voters. Never mind that they are not expected to reach the U.S. border until at least a month after the election. By the way, the news is still talking about politics. Even Fox News.

Finally, Trump posted a laughably conspiratorial tweet about Twitter removing his followers and making it harder for new ones to join:

Twitter has removed many people from my account and, more importantly, they have seemingly done something that makes it much harder to join – they have stifled growth to a point where it is obvious to all. A few weeks ago it was a Rocket Ship, now it is a Blimp! Total Bias?

This is the sort of brilliant, expert analysis you might expect from Sean Hannity, Lou Dobbs, or Diamond & Silk. Which is almost certainly where he got it. And it isn’t the first time that Trump has ranted – with zero evidence – that he and other rightists were the victims of social media bias. He has even promised to stomp the boot of government down on Twitter, Google, etc., if they didn’t bend to his will.

Trump’s claim that the number of his Twitter followers has declined from a “Rocket Ship” to a “Blimp” is not supported by any documentation. Like almost everything else he says, it’s backed up by his big fat assumptions based on nothing but an overactive imagination. If anything, any declines are more likely attributable to the fact that more than half of his followers are fake (and probably Russian).

Throughout all of this blathering idiocy, Trump is failing any test of leadership by focusing the country on unity and a determination to make our politics more civil and our people safer. He hasn’t even reached out to the victims in this matter, which include two former presidents. He only sees these things in terms of how they affect him personally. But that’s been his modus operandi since even before he was President. So don’t expect him change or “pivot” to acting presidential. Any who still thinks that’s a possibility is terminally naive.