The real picture of Donald Trump’s relentless pursuit of self-serving corruption got another section colored in on Tuesday. The New York Attorney General found that his Trump Foundation was a criminal enterprise devoted to enriching himself with other people’s donations (Here’s a quick primer on Trump’s scam foundation). Trump was forced to agree to shut it down under the supervision of the court. 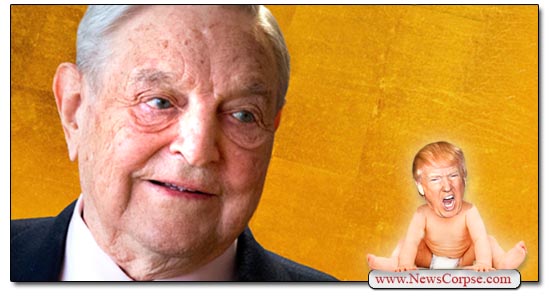 Despite Trump’s concession to the indisputable facts, Trump lashed out in fit of conspiracy mongering, blame-shifting, and paranoia on Twitter. However, he never rationally refuted what the NY Attorney General, Barbara Underwood, called “a shocking pattern of illegality involving the Trump Foundation.” The ruling went on to declare that Trump’s sham included…

“…unlawful coordination with the Trump presidential campaign, repeated and willful self-dealing, and much more. This amounted to the Trump Foundation functioning as little more than a checkbook to serve Mr. Trump’s business and political interests.”

What’s more, the lawsuit Trump faces continues to seek millions in restitution and prohibits Trump and his evil spawn from serving on the boards of other New York charities. Imagine that: Trump is barred from running a charitable foundation, but not from serving as president. There’s something horribly wrong with that picture.

And naturally, while making lame excuses for himself, Trump had to interject his obsessive animus toward his long-standing foes by taking a swing (and a miss) at the Clinton Foundation. There is really no comparison since the Clinton Foundation is a model for philanthropic enterprise and has received the top ratings from charity watchdog groups.

Meanwhile, another Trump nemesis, George Soros, was named “Person of the Year“ by the Financial Times. Soros is a true self-made billionaire (as opposed to Trump’s accident of birth and incompetent business skills), who is also renowned worldwide for his philanthropy. The Financial Times opened their tribute to Soros saying:

“The Financial Times’s choice of Person of the Year is usually a reflection of their achievements. In the case of Mr Soros this year, his selection is also about the values he represents. He is the standard bearer of liberal democracy and open society. These are the ideas which triumphed in the cold war. Today, they are under siege from all sides, from Vladimir Putin’s Russia to Donald Trump’s America.”

Indeed, Trump’s America is a regression toward the authoritarian regimes of the past that he openly admires. Trump abhors open societies wherein wannabe dictators like himself are denied the power they crave. And while Trump strives to use his position for personal gain, Soros has suffered as a result of what FT says is his “long commitment to openness, media freedom and human rights.” That suffering recently hit an extreme when he received a mail bomb from a right-wing domestic terrorist. But if that weren’t enough, he has also been falsely accused of collaborating with Nazis, although he was just fourteen years old when they occupied his native Hungary.

Fox News has been a major contributor to the coordinated hate campaigns against Soros. Their top hosts frequently portray him as something akin to the Antichrist, and as someone who is responsible for everything they regard as evil. Trump himself has exacerbated the hate-mongering aimed at Soros. Just a couple of months ago he tweeted a blatant lie that Soros was funding “very rude elevator screamers” who were protesting the nomination of Brett Kavanaugh to the Supreme Court. He has also been accused of funding the Central American refugees seeking asylum in the U.S. That charge was cited as a possible motive in the mass shooting at the Tree of Life Synagogue in Pittsburgh in October. Even Facebook’s CEO went after Soros in a despicable, anti-Semitic disinformation campaign.

However, through it all Soros has remained a steadfast champion of freedom and charity. His Open Society Foundation is the beneficiary of $32 billion of his own money. Those funds are being put to work in more than 100 countries to support democracy, transparency and freedom of expression. Thats a striking contrast to the corruption and greed of Trump’s phony charitable efforts. And it’s fitting that the recognition of Soros by the Financial Times comes the day after Trump is fingered as a crook by the NY Attorney General.

…Meanwhile some news about the Clinton Foundation today. pic.twitter.com/WFhw4NHKfb

One thought on “A Tale of Two Foundations: Trump’s Sham is Shutdown, George Soros is FT’s ‘Person of the Year’”