The current President of the United States has made this holiday season more difficult than it ever needed to be. Donald Trump has shutdown the government over an idiotic and ineffective vanity border wall that most Americans don’t want. He has tried feverishly to sabotage the Affordable Care Act (aka ObamaCare) that so many citizens depend upon. He has locked up babies in cages and blocked frightened refugees from seeking asylum in the land of the free. His ignorant policies on taxes and tariffs has resulted in the worst December stock market decline since the Great Depression. And his attacks on the media have endangered the lives of journalists in the U.S. and around the world. 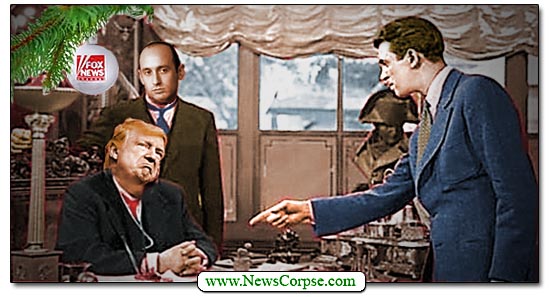 So Happy Holidays everyone. And stay strong. This is the season of giving and sharing and peace on Earth (for as long it’s still inhabitable). And there is great hope for the coming new year. The Blue Wave in November that swept Democrats into power in the House of Representatives, and many state houses as well, is continuing to build momentum. The truth is coming out about Trump’s cornucopia of crime, conspiracy, and collusion. The special counsel, Robert Mueller, will release his report, and perhaps throw in some new indictments. So while the dark cloud that Trump has cast over the world has not dissipated, it is beginning to break apart as many of Trump’s former supporters, and even Fox News, are showing cracks in their devotion to Dear Leader.

This Christmas may not be the brightest for the children of the nation. An unlucky few were even subjected to the horror of having to talk to Trump as part of the annual NORAD Santa Tracking project. As might be expected, Trump was wholly inappropriate during the calls to kids when he asked the very first caller this dream-crushing question:

Donald Trump, answering phone call from 7-year-old on Christmas Eve: "Are you still a believer in Santa? Because at seven it's marginal, right?" pic.twitter.com/VHexvFSbQ1

Can we get a restraining order to prohibit Trump from having contact with all children? He’s a menace who seems utterly incapable of interacting in a manner consistent with human decency. A few weeks ago Fox News reported that a teacher who told kids that Santa isn’t real was fired. Can that punishment be imposed on Trump? If it was bad enough to warrant the termination of a local teacher, how much worse is it when it’s done before the entire country by it’s alleged leader?

Behavior like this makes one wonder whether Trump’s dimwitted cult followers are watching the holiday classic “It’s a Wonderful Life” and thinking that the evil Mr. Potter is the hero. But despite these examples of presidential cretinism, most American families are enjoying the company of loved ones today. They are opening presents and dining on beautifully prepared feasts. And our best wishes are extended to them all. But let’s not forget the less fortunate, who are still part of our national family.

So in the spirit of the season, News Corpse would like to continue its holiday tradition by presenting a musical gift for the forsaken and forlorn. This is for all of those who are not huddled around a dead tree today, buried in colorfully wrapped packages. It’s for the cynics who won’t accept the notion that the birth of an alleged savior is an excuse to exchange material goods or fruitcakes that nobody likes. It is for outcasts and rebels and non-believers who are puzzled by the greed and commercialism that permeates the season. And yes, it’s for those who still believe that peace and goodwill are morally superior to profit and oppression. Here is Miles Davis and Bob Dorough performing the heartwarming traditional Christmas ballad Blue Xmas: