One of Donald Trump’s favorite subjects to brag about is the performance of the stock market since he became president. He has proclaimed himself to be a brilliant economist who knows more than anyone else, despite his six (at least) bankruptcies. And he promised that he would achieve historic gains through the sheer strength of his will. But given the recent turn of events in the markets, Trump is resorting to his customary back-up raving: Blaming anyone and everyone other than himself for the bad news. 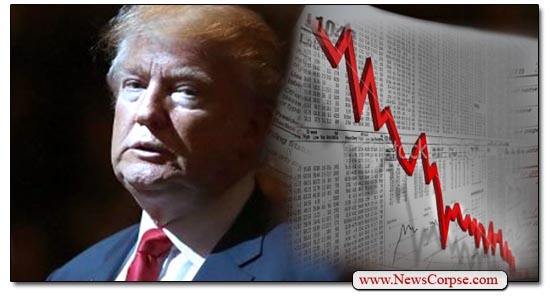 What’s happening in the markets was perfectly predictable. In fact, it was predicted here on News Corpse at the beginning of this year in a warning to Trump not to rest his laurels on the market’s performance:

“It’s always dangerous to rely on stock market performance to validate the economy. There are too many factors that can shift investor sentiment. It is a fluid indicator that could reverse course tomorrow. Indeed, many stock analysts regard the market’s current position as overvalued. These analysts are predicting a “correction” that could send the markets down significantly. Furthermore, the market does not reflect the economic realities of most Americans. Other economic indicators (i.e. wages) are showing only small advances. The beneficiaries of stock gains are predominantly the usual suspects of the GOP (Greedy One Percent).”

Trump chose to ignore these warnings. Instead he ventured off on a campaign of idiotic initiatives intended to make cosmetic improvements in the state of the economy. That failed bigly. Trump’s agenda was centered on three actions that informed economists knew wouldn’t work.

First there was his Tax Scam, a reform bill that provided most of its benefits to corporations and the wealthy.But it was also an unnecessary stimulus to an economy that was already overheated and it produced new debt in excess of $1.5 trillion, which makes investors nervous about rising inflation and interest rates.

When an economic stimulus is used at a time when it isn’t needed, that means that it won’t be available in the future when it might actually be useful. That led to investors looking forward to a future market correction, or even a bear market, and the government would have no tools to respond or mitigate the damage.

Second, Trump declared a trade war on pretty much the rest of the civilized world. His attacks extended to old foes/competitors like China, but also to friends and trading partners like Mexico and Canada. The result was a weakening of economic alliances and cooperative trade relations. Trump’s revamped NAFTA is a perfect example of a trade agreement that did nothing but alienate our allies. It also harmed the economies of those nations, which made them less able to consume American goods and services.

Finally, Trump’s tariffs accomplished only the price inflation of imported products into the U.S. It means that Americans would have to pay more for the same goods because the tariff penalties would be added to the cost for consumers. That is not the way to boost economic activity domestically, or exports to foreign markets who are responding with retaliatory tariffs of their own.

All of this has resulted in a stock market that is suffering its worst December since the Great Depression. It’s down 2,000 points this week, and 5,000 this quarter. As noted above, this was predictable. But Trump chose to lie to the American people about his divine ability to push the market ever upward. That is already causing some serious harm to the people who were foolish enough to believe him.

In the meantime, Trump is tweeting incoherently about “feeling” the market. In one tweet he literally said to “Feel the market, don’t just go by meaningless numbers,” and in another he said “The only problem our economy has is the Fed. They don’t have a feel for the Market.” Really? The market is one of the most data-driven institutions in the public sphere. And while it can sometimes react emotionally, it always settles into what the numbers tell us.

Trump’s childishly simplistic understanding of the market (and everything else) is reminiscent of Stephen Colbert’s admonition to “go by the gut” rather than the brain. Which Trump agreed with saying that “My gut tells me more than anybody’s brain.” No, really, that’s exactly what he said: