Well, somehow we all made it through another year. And this one was particularly challenging with a president who is most notable for his dishonesty, callousness, ignorance, and unconstrained ego. Donald Trump is testing this American experiment in democracy and he’s really putting it through the wringer. Along with his State TV (aka Fox News) division, the nation is either getting stronger or withering away. 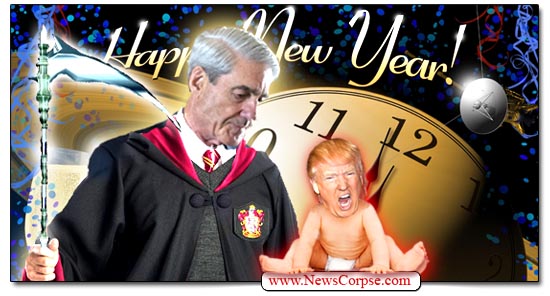 To hear Trump tell it, there is little to cheer about going forward. He literally tweeted the most pessimistic New Year’s message ever, saying that “Throughout the ages some things NEVER get better and NEVER change […] and it will ALWAYS be that way!” What an inspiring thought on the eve of a new year.

But if that wasn’t enough, Trump later posted a New Year’s video that reinforced his delusional, all-consuming obsession with himself (video below). He leads off by congratulating himself because, in his diseased mind, “there’s never been an administration that’s done more than the Trump administration.” If you recall, that’s what he said at the United Nations a few months ago where the ambassadors of world laughed in his face. Such a proud moment for America.

That was followed by a litany of his alleged achievements that were nothing of the sort. He praised an economy that is “doing great” despite this being the first time in ten years that the stock market finished in the red for the year. He lauded rising wages that are the result of Democrats increasing the minimum wage across the country over the objections of Trump and the GOP. He thanked himself for trade deals and treaties that are either ineffective, non-existent, or downright destructive. And of course, he ranted incoherently about his idiotic vanity wall saying that without it there are no borders, and therefore no country. So what has been taking up all this real estate between Mexico and Canada for the past two and a half centuries?

Finally Trump closes with some of his familiar campaign gibberish. It may be his way of convincing himself that special counsel Robert Mueller isn’t real, you know, like Santa Claus. And he stutters out a New Year’s wish that focuses exclusively on him:

Trump knows his audience is too dumb to get any message without being pummeled with it at least three times. Hence his repetition of the imaginary “winning” mantra. And he makes sure that the only years that he singles out for future enjoyment are those wherein he’s eligible to still occupy the White House. Never mind that most Americans will only enjoy those years if he’s been removed and, preferably, incarcerated. That would indeed be beautiful.

And to top off the night, Pete Hegseth of Fox News did a typically sycophantic phone-in interview of Trump from Times Square. It featured all of the expected Trumpian hogwash with some slobbering adoration from Hegseth. And it was all politics, no partying. Trump did his routine border wall blather, lashed out at Democrats, and for some reason boasted that “Nobody knows more about technology than me.” And he further applauded himself for “producing better than I actually said.” If he means producing more division and hatred and trouble for our country, he’s right. And as if to prove that point, Trump posted a deranged, all-caps tweet New Year’s morning that continued to malign the press and insult anyone who doesn’t sufficiently idolize him:

The year ahead is going to be as challenging as the one that just came to an end. As Mueller gets closer to nailing Trump and his crime family, he will get more belligerent and deranged. He will escalate his hostility and lies. So stay positive, engaged, and hopeful for the coming year and ultimately the return of justice, democracy, and sanity to America. And have a HAPPY NEW YEAR EVERYBODY.

2018 has been a year of historic accomplishments! pic.twitter.com/6Iq5CFVdwY

2 thoughts on “A Happy New Year Message from Donald Trump: ‘Some Things Never Get Better and Never Change’”