On the precipice of a new year, Sen. Elizabeth Warren has released a video (below) announcing that she is forming an exploratory committee to test the waters for a prospective presidential campaign. She is the first of what will likely be a big pool of Democratic hopefuls seeking to cast out Donald Trump in 2020 – if he makes it that far (Mueller?). 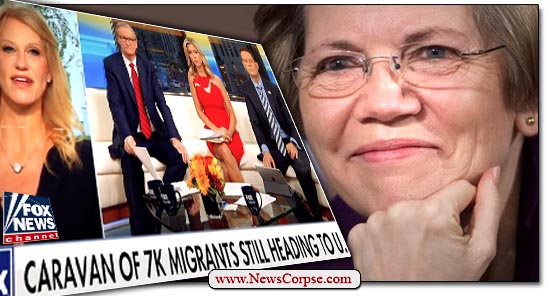 Notable in her video was the fact that she didn’t mention Trump’s name once. That will surely drive him nuts. There’s nothing he craves more than hearing his own name in pretty much any context. But she concentrated on bread-and-butter issues of importance to America’s middle class families. For instance, she laid out a platform that directly addresses the threat of corporatism and income inequality:

“I spent my career getting to the bottom of why America’s promise works for some families, but others who work just as hard slip through the cracks into disaster. And what I found was terrifying. These aren’t cracks that families are falling into. They’re traps. America’s middle class is under attack. How did we get here? Billionaires and big corporations decided they wanted more of the pie.”

Warren went on to link the political class to the problems that Americans are experiencing. She noted that the one-percenters “enlisted politicians [and] crippled unions.” to achieve their self-serving goals. And she pointedly stated that “Today corruption is poisoning our democracy.” She may not have said Trump’s name, but he was ever-present in her remarks.

It was also encouraging to see that Warren wasn’t shy about holding Fox News accountable for their contribution to the decline of Western Civilization. She took on the wealthy elites and Fox News saying forthrightly that:

“The whole scam is propped up by an echo chamber of fear and hate designed to distract and divide us.”

While she spoke those words there were images of Sean Hannity, Tucker Carlson, Fox and Friends, and Laura Ingraham prominently displayed. She got in the whole primetime lineup, plus Trump’s favorite Fox News morning show.

This is the kind of fearless honesty that will be needed to beat Trump (or whatever GOP hack runs in his place) in 2020. You can rest assured that Fox News will there to advance the lies and hostility of the Republican agenda and defeat the champions of unfettered democracy who are fighting for the welfare of the majority of American citizens.

The Trump presidency has shown us that the GOP couldn’t care less about ordinary people, honest representation, or the rule of law. But it has also shown us that there are voters who are susceptible to flagrant deception and who are willing – even eager – to be lied to. They are the rubes that Fox News is designed to corral into the GOP camp. And the rest of us need to be alert and engaged in order to preserve our country and the democracy that it pioneered.