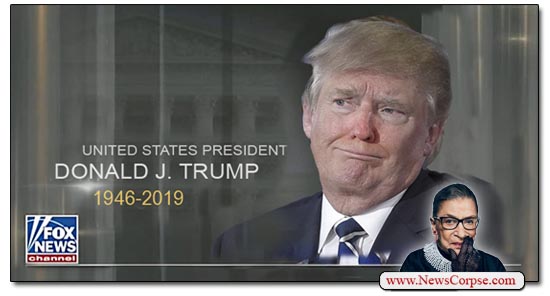 This is not only a bad mistake, it is a morbid revelation that Fox News keeps such graphic materials handy and ready to broadcast at a minutes notice. To be fair, all news outlets have obituaries prepared in the event of the death of any famous person. They keep the files handy so that the news can be announced quickly without having to create it from scratch on the spot. But it is unusual for them to be queued up for live airing unless the person has been reported to be on their deathbed.

"@foxandfriends " mistakenly aired a graphic suggesting that @USSupremeCourt #Justice #RuthBaderGinsburg died. Justice #Ginsburg will outlive us all– just to prove a point!

“We need to apologize. At the beginning of Ainsley’s interview with a professor, a technical error in the control room triggered a graphic of Ruth Bader Ginsburg with a date on it. We don’t want to make it seem anything other than that was a mistake. That was an accident. We believe that she is still at home recovering from surgery. Big mistake in the control room.”

No kidding. The thing is, if this had happened on any other network with – for instance – a graphic of Donald Trump, Fox would have devoted half the show to it and insisted that it was a deliberate slur for which the network should be immediately shut down and the people responsible stripped of their citizenship and deported.

Following that, it would be picked up on subsequent programs throughout the day until it reached the peak of frenzy during Fox’s primetime block. Then Sean Hannity would declare that the whole thing was actually a threat to assassinate Trump and he would call for the arrest of the CNN anchors and executives.

Fortunately, this happened on Fox News so all that was required was a ten second acknowledgement and then we would never hear another word about it. No explanation for how it occurred. No word on who was responsible or what the consequences would be. And no comment from Ginsburg, the victim of this blunder, or any attempt to deliver a personal apology. But rest assured that the next time CNN or the New York Times misspells Melania’s name (as Trump did), there will be hours of attacks on what they call “Fake News.” And Trump himself would weigh in with his condemnations of “the enemy of the people” hoping for his demise.

5 thoughts on “Fox News Airs Ruth Bader Ginsburg Obituary Pic – What Would They Say if CNN Did the Same to Trump?”