The day that nobody was waiting for is finally here. Donald Trump will deliver his State of the Union address on Tuesday night. It was delayed for a week by House Speaker Nancy Pelosi until Trump surrendered his demand for an idiotic wall along the southern border. Trump succumbed to Pelosi’s pressure partly because the widespread opposition to his wall depleted any leverage he might have had, and partly due to his ego-driven desire to stand before a joint session of Congress (and the nation’s TV cameras) to exalt himself and lie to the American people. 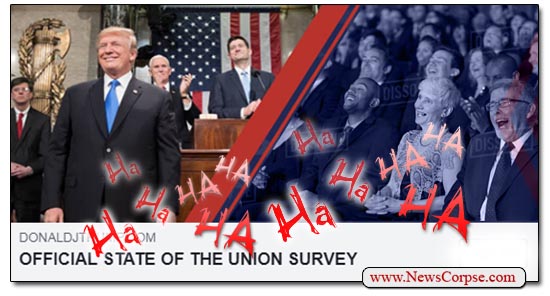 His questionnaire is not really a survey, but instead a marketing gimmick to acquire people’s email address for future spam mailings from his campaign. There is also a pitch for donations after a respondent completes the poll. Those are the real reasons this “survey” exists. A previous version of this scam dubbed the “Official Presidential Job Performance Survey,” asked “How would you rate President Trump’s job performance so far?” And the multiple choice options for your response were “Great,” “Good,” “OK,” and “Other.” Seriously!

This new survey was more of the same. It began with a fair question that asked “Do you approve of the job done by President Donald J. Trump?” This time they actually provided a choice that included both a positive and negative reply. But it went downhill from there. The questions were flagrantly biased and intended to produce answers that made the President look good. For instance, there was a question that asked “Do you think the media did a proper job of blaming Democrats for the Shutdown?” Of course, an affirmative answer agrees that Democrats were responsible for the shutdown and were properly blamed. A negative reply also means that Democrats were responsible, but deserved more blame.

Many of the rest of the questions were similarly slanted or loaded with premises that are outright lies. such as:

– And have they stopped beating their wives?

– Which is something that the U.S. was not doing.

– Contrary to the long-held values expressed on the Statue of Liberty welcoming “your tired, your poor, your huddled masses yearning to breathe free.”

– Trump will never have the guts to reveal the results for this question.

– Which he has never emphasised in anything more than empty rhetoric.

– Who he has lied to, robbed from, and betrayed at every turn.

– Trump should ask the world leaders this question – if he can stand the fierce rejection.

– Clearly Trump doesn’t, and he said so explicitly in a recent disgusting interview wherein he accused Pelosi of “doing a terrible disservice to the people of our country,” and alleging that she “doesn’t mind human trafficking.”

This is the sort of blathering propaganda that is emblematic of aspiring tyrants and familiar from Donald Trump. It’s purpose is to brainwash the ill-informed, and to keep those already fooled squarely within the embrace of the Trump Cult. The results of this survey will never see the light of day, because it’s a pretty fair bet that they would embarrass the President. Every poll shows that he is treading historic lows in voter approval, and his policies are massively unpopular.

None of that, however, stops Trump from pretending that he is well-loved and achieving successes far beyond what any human being ever imagined. That’s the sickness of a malignant narcissist and a wannabe dictator who is as far removed from reality as the Earth is from the Sun. And dumb polls like this only serve to prove that Trump is scared and deceiving both himself and his dimwitted Deplorables.