You have to hand it To the Trump-fluffers at Fox News. It hardly matters what the substance of any story is, they will twist it into a positive propaganda piece for Donald Trump, or a lame criticism of of his opponents. They have staff on call 24/7 to massage the news of the day into something utterly dishonest so that it would fit nicely into a Trump campaign ad. 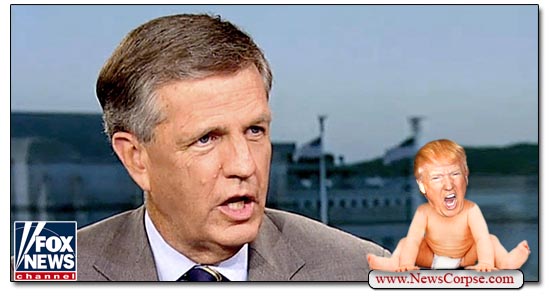 Take for instance Brit Hume, the Sr. Political Analyst at Fox News (and former chief news anchor). On Saturday morning he was riffling through the Twitter-verse on the hunt for anything he could spin to tickle the fancy of of Fox’s fave fascismo, Donald Trump. And, lo and behold, he stumbled onto a video of Sen. Kamala Harris campaigning in Columbia, South Carolina.

This is just embarrassing. So now journalists are going shopping with Harris, helping pick out clothes and then putting out glowing tweets about it. https://t.co/RX2IY0B8JL

This video shows Harris visiting a boutique during a campaign swing that featured small businesses owned by women. Ordinarily that would seem to be an admirable recognition of an important, and too often neglected, constituency. It is certainly a sector of the electorate that both Trump and Fox News generally ignore, when they aren’t insulting them. But for Hume to complain that this was somehow “embarrassing” just boggles the mind.

Hume was triggered by what is merely a human interest clip of a candidate interacting with voters. The video was posted by CBS News reporter Caitlin Huey-Burns. There was nothing “glowing” about it. It was a typical observation of a candidate in the field. There are thousands of these presented in every election for every candidate.

Someone needs to remind Hume that he works for the network that serves as the dedicated PR division of the Trump White House. Everyone from their morning suck-ups on Fox and Friends, to their primetime knob polishers, do nothing but deliver video wet kisses to Trump (which hasn’t been working out very well for them in the ratings). The biggest star on Fox News, Sean Hannity, unleashes slobbering poems of political devotion every night. He has even appeared on stage with Trump at his cult rallies (and Trump has returned the favor with promotional tweets). That’s true for several other Foxies also, including Brian Kilmeade, Pete Hegseth, Laura Ingraham, and Jeanine Pirro. These are people who unambiguously campaign for Trump.

This is a superb example of the tunnel-blindness of Fox News. They lash out at Democrats and liberals for the most innocent activities, but ignore the the flagrant crimes committed by Trump and his nefarious associates. A perfect recent example is Trump’s Hannity-inspired declaration of a national emergency. Just the sort of thing they said Obama should be impeached for. If you strung Fox’s hypocrisies together, they would encircle the Earth a few hundred times, while still insisting that the Earth is flat.