For most his presidency, Donald Trump has demonstrated a remarkable capacity for failing to understand the simplest matters that unfold in current events. Either that or he is deliberately distorting reality to conform to his preconceived delusions. This is evident in everything from his confused grasp of the economy, to his embarrassing belief that stealth fighters are actually invisible. 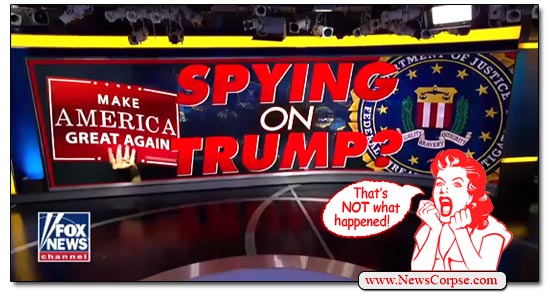 On Friday morning Trump took another step into the cognitive void. He posted a tweet that offered backhanded praise to the New York Times for an article about the FBI’s investigation into his campaign’s contacts with Russia. But his comprehension of the Times article was indicative of a diseased mind:

Finally, Mainstream Media is getting involved – too “hot” to avoid. Pulitzer Prize anyone? The New York Times, on front page (finally), “Details effort to spy on Trump Campaign.” @foxandfriends This is bigger than WATERGATE, but the reverse!

It was thoughtful of Trump to suggest that the Times should get a Pulitzer Prize. Especially since they already got one this year for “an exhaustive 18-month investigation of President Donald Trump’s finances that debunked his claims of self-made wealth and revealed a business empire riddled with tax dodges.” But Trump’s tweet missed the whole point of the story. He also missed the headline, which his tweet falsely quoted as “Details effort to spy on Trump Campaign.” The actual headline was “F.B.I. Sent Investigator Posing as Assistant to Meet With Trump Aide in 2016.”

Notice that what Trump called a “spy,” the Times referred to as an “investigator.” And that’s precisely how Fox News helpfully sought to elaborate on Trump’s glitchy characterization. The “Curvy Couch” potatoes of Fox and Friends did a segment on the story by the Times that led with a gleeful Steve Doocy completely misrepresenting it (video below):

“So it’s a big story in the New York Times. Remember a couple of years ago when Donald Trump said the government was spying on him? Turns out the New York Times, in this morning’s edition, right here on the front, we’re gonna show you the headline, ‘FBI Sent Investigator Posing as Assistant to Meet with Trump Aide in 2016.'”

First of all, can anyone explain why Fox put that MAGA sign in the graphic, other than as a free advertisement? More to the point, Doocy went on to describe the story as involving Trump’s foreign policy advisor, George Papadopoulos, who the FBI was indeed investigating to ascertain his links to Russia. Doocy even acknowledge that, although he repeated Trump’s rhetoric about spying, which is not what happened. But co-host Brian Kilmeade agreed and then went full conspiracy crackpot by accusing the FBI of “covering their tracks” due some to imaginary exposé that Kilmeade wouldn’t reveal.

In reality, this was part of an investigation that had already begun. It was initiated after an Australian diplomat told the FBI about a meeting he had with Papadopoulos in a London bar. Papadopoulos revealed that he had access to damaging information about Hillary Clinton obtained by Russian hackers. That meeting took place in May of 2016. The meeting referenced in the New York Times story took place in September of 2016, several months later. So, since the investigation was already in progress, what exactly were Trump and Fox News so excited about? The Times story merely affirms prior reporting that Trump’s campaign had unsavory associations with Russia that were worthy of scrutiny.

Trump has been whining incessantly about what he calls a “Witch Hunt” and a “hoax” for much of the past two years. But his contention that he was the subject of spying is ludicrous. When law enforcement assigns officers to engage in surveillance it is routine and legal investigative work, not spying. And in Trump’s case, it was all conducted with strict oversight and lawful warrants issued by independent judges. Nevertheless, Trump managed to twist the Times’ story into something it wasn’t, and then declared some sort of deranged victory.

This is just another sorry attempt by Trump – with Fox’s help – to malign the FBI and American intelligence agencies. That’s something that he has been working hard at because he knows what he is guilty of and, therefore, needs to discredit the police agencies who are protecting the nation from criminals. Criminals like Donald Trump, who also tweeted that he spoke with Vladimir Putin Friday morning. His tweet indicated that they spoke about the “Russian Hoax.”

So now Trump is talking to our enemies about his attacks on American law enforcement? Is he still colluding with Putin to coordinate their stories that there was “no collusion, no obstruction”? Doesn’t he realize that Putin is a subject of the investigation by the FBI, and it’s entirely inappropriate for him to discuss the case with Putin? And given all of that, do we really need any more reasons to impeach Trump?