Last week Donald Trump made a big deal about his dealmaking prowess. After petulantly threatening to impose ill-advised tariffs on Mexico if they didn’t obediently comply with his demands on immigration, Trump triumphantly declared that he had won this manufactured showdown with the announcement of a new border agreement. Needles to say, this is more of his typical bluster and bragging about something he had not actually done. 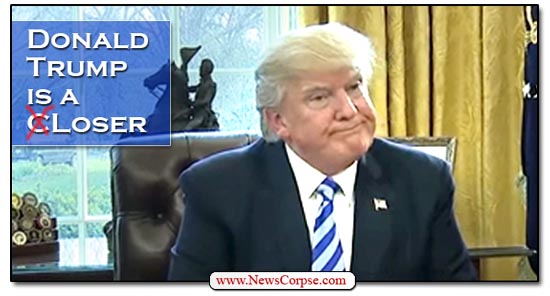 In reality, the terms to which Mexico agreed were negotiated months ago and had nothing to do with his recent tariff temper tantrum. Additionally, there was no agreement for Mexico to buy more agricultural products from the U.S. as Trump dishonestly tweeted. What’s more, Trump’s assertion that there is a secret pending agreement with further concessions has been flatly denied by Mexico’s foreign minister.

Trump disgorged an extended tweetstorm on Monday morning complaining that the media was misrepresenting his alleged achievement. He naturally focused on his perennial foe, the New York Times, which he once again referred to in Stalinist terms as “enemy of the people.” He said, without support, that their story had “been proven shockingly false,” and asked when they would admit that the story was a fraud and “Sick Journalism.” Instead, the Times responded saying:

Reupping this from @NYTimesPR in case there's any confusion: "We are confident in our reporting, and as with so many other occasions, our stories stand up over time and the president's denials of them do not. Calling the press the enemy is undemocratic and dangerous."

So Trump’s made up controversy over Mexico was resolved with a made up victory celebration. That is a repeating pattern in Trump’s presidency. In fact, the self-proclaimed master of the “Art of the Deal” (which was ghost written for him by Tony Schwartz), is actually a notorious failure. A recap of his half term in office reads like a resume of flops. Trump has now…

In addition, Trump has been an epic washout with Congress, failing to secure…

If this is the record of Trump when he’s winning, we should all be terrified of what will happen when he’s losing, or at least when he can no longer deny it. The only initiative that Trump can claim to have prevailed on is his Tax Scam that was passed by a deeply partisan, GOP controlled Congress. And on that he only succeeded in getting it passed. The actual consequences of the bill have been devastating for most Americans, specifically those who aren’t among the ultra-rich. Trump’s deal fumbling is so conspicuous that even his pals in the Kremlin are mocking him:

#Russia’s state TV describes Trump as a self-proclaimed master of the deal, with no deals to speak of. “You will laugh, but Trump doesn’t have a single ratified deal under his belt. He's only destroying existing deals & agreements,” says top Kremlin propagandist Dmitry Kiselyov. pic.twitter.com/SeF4CalD9n

Trump’s vain self-promotion will undoubtedly continue as he sinks ever further into the abyss of failure. And remember, he was a recidivist loser before he became President. He had at least four bankruptcies (including casinos) and numerous product flops like Trump Vodka, Trump Shuttle, Trump Steaks, and Trump University.

You can always tell what is stirring the most anxiety in the crybaby President by what he tweets about with the most frequency and ferocity. This weekend he tweeted about Mexico more than twenty times. The only thing that he’s more obsessed with is trying to convince everyone that there was “no collusion, no obstruction” in the Russia scandal. Which, of course, the Mueller report has plenty of evidence of both. Even Fox News says so. And if that isn’t a signal that Trump’s winter is coming, nothing is.

One thought on “WINNING? Donald Trump’s Presidency Affirms his Mastery of the Art of Destroying Deals”