On his regularly scheduled Sunday Morning Tweetstorm, Donald Trump affirmed his devout racism by attacking four Democratic representatives who also just happen to be women of color. Trump’s tweets are so abhorrent that even his own administration refused to defend the blatantly bigoted remarks. But Trump’s hatefulness extends even beyond the racism aimed at political foes. 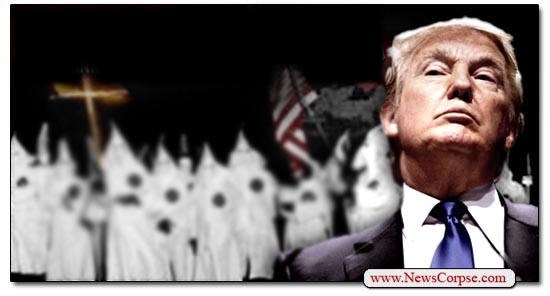 In the series of tweets that Trump posted, he managed to include an array of hate messages that are, sadly, typical, of his public comments. He tweeted that:

….and viciously telling the people of the United States, the greatest and most powerful Nation on earth, how our government is to be run. Why don’t they go back and help fix the totally broken and crime infested places from which they came. Then come back and show us how….

….it is done. These places need your help badly, you can’t leave fast enough. I’m sure that Nancy Pelosi would be very happy to quickly work out free travel arrangements!

The representatives Trump is targeting are Ayanna Pressley, Rashida Tlaib, Ilhan Omar, and Alexandria Ocasio-Cortez. Although he is too afraid to actually mention their names. And it’s inescapable that his comments were directed exclusively to “Progressive Democrat Congresswomen.” So he is not only exposing his festering bigotry, he is also displaying the misogyny that has long been a part of his repugnant character. It is what leads to his abuse of women and his friendships with other abusers (i.e. Jeffrey Epstein, Roger Ailes, and Bill O’Reilly).

What’s more, Trump is maligning the countries that he is telling these women to go back to. He calls them “the worst, most corrupt and inept anywhere in the world” and “totally broken and crime infested.” It’s reminiscent of his blanket disparagement of what he called “shithole countries” last year.

The unmistakable signals that Trump is sending to his white nationalist base is disgusting and intolerable. But it’s made all the worse by his ignorance. Three of the four representatives Trump targeted for this harassment were actually born in the U.S. So Trump’s attack is based solely on his stereotyping of them by the color of their skin. It’s notable that he never made any such demands of Republican representatives who really are foreign born (Dan Crenshaw: UK; Mark Meadows: France; David Rouzer: Germany; Ted Cruz: Canada). Maybe it has something to do with the fact that they are all men from predominantly white, Eurocentric countries.

In addition to these tweets that call for banishing Democratic women of color, Trump also posted a frantic flurry of twenty-one (21!) tributes, by mostly random and anonymous tweeters, to an utterly phony “movement” aimed at persuading African-Americans to “walkaway” from the Democratic Party. It’s part of the broader “Blexit” fraud that Fox News has pushed.

The white-wing of the GOP really thinks that African-Americans are stupid enough to ignore hateful diatribes like the ones Trump just posted, and join the party of oppression and white supremacy. And Trump is so demented that he believes that promoting the racist walkaway scam, in the same barrage of tweets where he insults congressional women of color, is a winning strategy to advance black acceptance of the GOP. This only confirms the many diagnoses of Trump as a sociopathic narcissist who is unfit to serve.

And for those who were curious, Fox and Friends thought it was funny:

Fox and Friends hosts laugh about Trump’s tweets this am telling Reps. AOC, Omar, Pressley, and Tlaib to “go back” to the "crime infested places from which they came"
pic.twitter.com/WxWn7rEGNN

8 thoughts on “Hate Screech: Trump Tells U.S. Born Democratic Congresswomen to ‘Go Back Where You Came From’”