These final days of the year will ordinarily find most Americans gathering together with family to enjoy the spirit of the season and give thanks for enduring love and good fortune. However, nothing that Donald Trump does ever aligns with anything ordinary. This Christmas Trump was asked by soldiers in a holiday phone call what he intended to do for the holidays. He said that he would probably just work because that’s what he likes to do. Then he went off to golf at his Palm Beach resort. 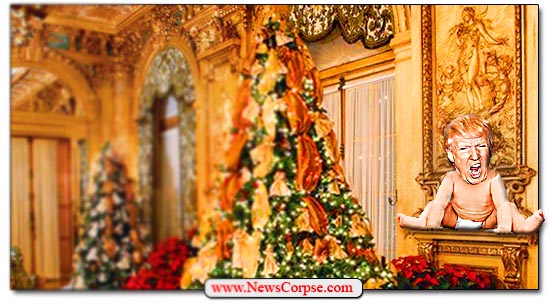 There is no evidence of this being a holiday at all in Trump;’s White House. Trump hasn’t tweeted any pictures with his family, including his young son Barron. He hasn’t bought his wife a present, but says he did get her a card. There doesn’t appear to have been any dinners with his kids and grand-kids, although he did dine with Rush Limbaugh. What there is on Trump’s schedule is what he does all the rest of the year: WHINE! And there’s been plenty of that.

Trump’s Twitter feed is awash with petulant crybaby laments. For the most part he is complaining about having just been impeached. And while he is pretending that he isn’t bothered by this permanent stain on his legacy, he can’t seem to let go of it. His griping takes the form of bizarre assertions that he hasn’t been impeached at all. Or that House Speaker Nancy Pelosi is crazy and incompetent. For instance…

….mount some kind of public pressure to demand witnesses, but McConnell has the votes and he can run this trial anyway he wants to. @brithume @foxandfriends

….the American public’s tone deafness – & it should be intolerable, because the American people have had it with this.” @kilmeade @foxandfriends The Radical Left, Do Nothing Democrats have gone CRAZY. They want to make it as hard as possible for me to properly run our Country!

Those tweets are quotes from Fox News Trump-fluffers, Brit Hume and Brian Kilmeade. They are not in any way representative of reality. They barely make logical sense. For example, Kilmeade is says that Democrats are showing that “they don’t care about the American public’s tone deafness.” HUH? And then Trump adds that “They want to make it as hard as possible for me to properly run our Country!” There are just two things wrong with that remark. First, it falsely presumes that he is able to properly run our country. And second it misses the real point, which is that Democrats are only trying to make it hard for him get away with treasonous crimes.

So Trump spent the day watching Fox news and whining about what a victim he is and how all these meany Democrats are persecuting him. He’s supposed to be the leader of the free world but he can’t stop sobbing about what he thinks is unfair treatment. He’s been doing this for months without a rest. And he’s too unaware to recognize that he’s the cause of all his troubles. So on and on he goes, even through the holidays. And there is no reason to expect it to end as the new year begins. Whining is all Trump knows how to do. He even once admitted that “I am the most fabulous whiner.” Which may be the truest thing he ever said.

2 thoughts on “Donald Trump’s Fox News Inspired Holiday Eve Special: All I Want for Christmas is to Whine”