Each day that passes, Donald Trump appears to be sinking ever further into the Mariana Trench of desperation and deceit. His rapidly unraveling mental state becomes more critical and evident to all who are paying attention. It’s an unprecedented public display of an emotional breakdown playing out before millions, not unlike his old reality TV game show performances. 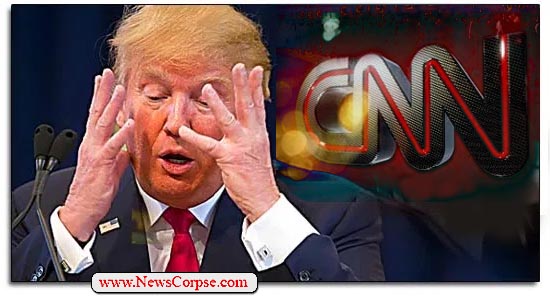 Trump is frantically trying to buttress his disintegrating psyche by lashing out incoherently at his many perceived enemies. He is cowering in a bunker constructed by a diseased, fearful, and paranoid mind, and refusing to engage with the “haters” that he is convinced mean him harm. And he consoles himself with increasingly deranged reassurances that he is beloved by everyone.

The truth, however, is surely going to result in even more outlandish outbursts from the fragile ego of our defective “president.” A new poll by Monmouth University asked respondents this provocative question: If Donald Trump and CNN gave conflicting information about the coronavirus outbreak who would you be more likely to believe – Trump or CNN?

Trump has made a point of broadly disparaging the free press for the past three years. He does this, as he openly admitted, in order to discredit them so that they they won’t be believed when they criticize him. And he has frequently singled out CNN as one of the primary targets of his wrath, calling them “fake” news and lying about their ratings.

Consequently, Trump won’t be thrilled about the response to the question above. The poll found that a majority of 51% say they believe CNN more than Trump. A mere 38% said they would believe Trump more. That’s a number that aligns with his dismal approval ratings. And as an indicator of how mired in cultism Trump’s supporters are, 82% of Republicans believe Trump over CNN. They even opt for Trump over Fox News (66% to 20%). These results are in line with previous polls on the same subject. In March respondents said that they trusted CNN more by 48% to 35%. They also said they trust MSNBC more by 45% to 32%. And for good measure, Monmouth’s national survey of the presidential race finds Biden expanding his lead over Trump (50% to 41%).

If anything gets under Trump’s notoriously thin skin it’s the prospect that people might be less than worshipful of him. He demands total loyalty, devotion, and unflinching support for his every word and deed. Should anyone be even modestly critical he will go after them like a starving piranha. He demonstrated this viciousness in a recent rage-tweeting episode directed at the producers of an anti-Trump political ad.

However, CNN is not just a another source of aggravation for Trump. He regards them as a mortal enemy. He harbors a deep hatred for the network and every person associated with it. He lobs infantile insults at their reporters, anchors, and executives. He lies about their ratings and finances (which are both hitting record levels lately). He threatens them in a manner that is censorial and flagrantly anti-constitutional. And he is even suing them.

Trump despises CNN so much that he can’t help but watch it obsessively. He knows all their anchors and is on top of their breaking stories about him. He has tweeted derogatorily about them 17 times in just the past month. So discovering that the American people prefer CNN to Trump is likely to trigger an acute aneurysm that could result in severe brain damage. Not that anyone would be able to tell the difference.