Conservatives have lately been escalating their umbrage at being called racist. I keep telling them that the best way to get people to stop calling you racist is to stop being racists. But do they listen?

Today on Fox Nation there is a featured story with the headline: “Obama Has A Big Problem With White Women.” Could they have come up with a more racially charged banner with which to introduce a story on a public opinion poll? This framing deliberately recalls the worst of a hate-filled era characterized by irrational fears of marauding black predators stalking innocent and vulnerable Caucasian virgins. 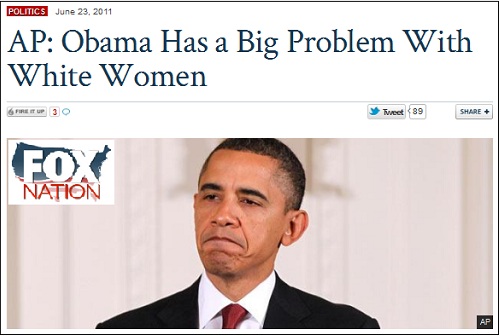 What makes this even worse is that the article to which the Fox Nationalists linked was an Associated Press report on presidential approval polling that cited numerous reasons for recent declines. Among those were that support from women declined about 9%. However, support from independents declined 19%. The AP’s headline had nothing to do with women, reading: “Economic worries pose new snags for Obama.” The main focus of the article pointed to issues like jobs, housing, and gas prices, as the the primary factors contributing to weakening poll numbers. So Fox had to purposefully stretch the story to fit their predetermined racist theme.

They could have borrowed the economic angle that the AP used in their headline. They could have noted that independents were leaving the Obama camp, which would have been more correct because more of them were leaving. They could even have broadened the angle to attribute the polling slump to women generally. But, no. The issue was white women. I’m just a little surprised that Fox didn’t go with this headline: “Obama Polling: Where Da White Women At?”

Fox Nation, in citing the AP, also conveniently left out that…

“…16 months before the November 2012 elections, Obama also is perceived favorably by 56 percent of respondents and 52 percent approve of his job performance overall. Despite the overwhelming sentiment that the national economy is in poor shape, more than three of five of those polled rated the financial situation of their own households as good. And, echoing previous findings, about three-quarters of the survey participants said it is unrealistic to expect noticeable results on the economy in one term.”

These numbers are not particularly bad. And that last statistic is pretty remarkable. That’s about 75% who say that Obama should not be regarded negatively for not having repaired, in a single term, the titanic destruction done to our nation by the previous administration and GOP policies. And since Republicans have been throwing up obstacles to everything the President has proposed from Inauguration Day on, we’re lucky to see the progress that we have.

In light of this, the Fox Nationalists deemed it necessary to twist the story into something that would harm the President and stir up vile, anachronistic fears. And their implementation of that spin could not be more offensive. This is not the way to get open-minded, tolerant people to stop calling you racist.

11 thoughts on “Fox Nation: Obama Has A Big Problem With White Women”