For over a month now, Donald Trump has been stubbornly insisting that he won the election, despite Joe Biden receiving seven million votes more than Trump and a 306 to 232 electoral college victory. Defying reality, Trump continues to whine about alleged voter fraud for which he has no proof. He’s already lost about four dozen lawsuits for lack of evidence. 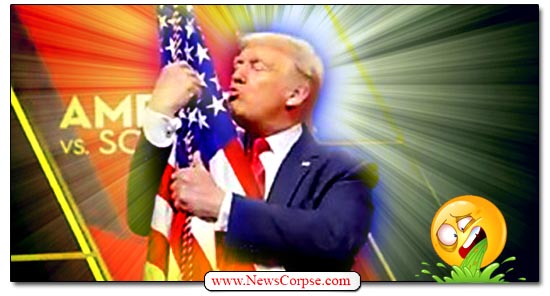 Meanwhile, Fox News remains steadfastly on Trump’s side, disseminating blatant lies and conspiracy theories in support of Trump’s manic delusions. On Monday morning Fox hosted disgraced former GOP Speaker, Newt Gingrich to advance the phony election fraud story (video below). The segment was intended to bolster the vain hopes of glassy-eyed Trump cultists, and on that measure, Gingrich did not disappoint with this ludicrous diatribe:

“This election is gonna come down to turnout. The objective fact is, I believe Trump probably did actually carry Georgia.”

There is an obvious logical flaw in that commentary. Notice that Gingrich is describing what he “believes” as an “objective fact.” Beliefs are, by definition, not facts. It’s like saying “there’s a pink elephant in my living room, and if you don’t believe me, just ask him.” This analogy also works because Newt’s contention that Trump won Georgia is about as real as that elephant. Gingrich continued…

I believe that the election process is a mess. I really wish the governor would call a special session to clean it up. And the Republicans simply have to turn out more votes than Stacey Abrams can steal.”

There he goes again, relying on his “beliefs” to justify complex and expensive legislative activities for which there is no discernible reason. Even worse, Gingrich is now accusing Stacey Abrams of committing felony election fraud – without a sliver of evidence – for an election that is still a month away. And he continues further…

“Every person who’s worried about the future of the country, from a conservative standpoint, has to go vote. And that’s the number one challenge. Not the debate or the arguments. Just getting people to vote in this runoff.”

That’s the sort of inspirational rhetoric that Republicans specialize in. Never mind making persuasive, logical arguments based on facts and reason. Just drag your bones to polls and place your mark on the bottom line like you’re told to do. Be good sheeple and Dear Leader will reward you in the Beyond World.

It’s notable that nobody on Fox and Friends bothered to challenge Gingrich’s lies and irresponsible guidance. Even though Fox News called the election for Joe Biden way back on November 7, and Georgia’s votes have been counted three times without any change in the outcome. The “news” reported on Fox is disposable if it doesn’t affirm the fantastical beliefs of the Trumpists. That’s the “Faith Based” model of journalism that dominates the right-wing media. And Gingrich, and his Fox Friends are merely the televangelists of this pseudo-spirituality.

Fox's Newt Gingrich: "The objective fact is I believe Trump probably did actually carry Georgia. … Republicans simply have to turn out more votes than Stacey Abrams can steal." pic.twitter.com/xKhpwEBdqU