After a week of conspicuous silence since the Trump Insurrectionists assaulted Congress, Donald Trump finally made a few self-serving remarks to the press on his way to a photo-op with his holey border wall that Mexico didn’t pay for. It was typical of Trump’s exploitation of the media to exalt himself and malign his foes. 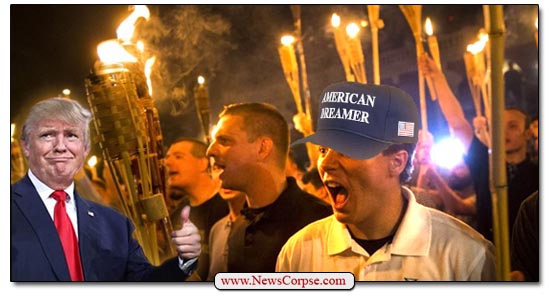 The first of his comments came while leaving the White House. He called the new moves by Congress to impeach him “a continuation of the greatest witch hunt in the history of politics,” and complained that Nancy Pelosi and Chuck Schumer are “causing tremendous danger to our country, and it’s causing tremendous anger.” That’s coming from someone who fired up a dangerously overheated mob by telling them that “we fight like hell and if you don’t fight like hell, you’re not going to have a country anymore”

So Trump is issuing a warning that any effort to hold him accountable for his inflammatory rhetoric that inspired a mob of coup plotters would result in further violence by the same deviant mob. It’s not unlike a Mafioso threat to comply lest something terrible happen to your lovely shop. It’s demanding capitulation to a terrorist threat.

Trump addressed the press again later to elaborate on his threats of rising anger among the troops of his seditious army. After lashing out at the “horrible things” “Big Tech” is doing, he wrapped himself in the warm fuzziness of what he imagines is “support probably like nobody’s ever seen before.” He’s actually kind of right. His support is currently at a record low of 33% and majorities say he should be removed from office or resign. And it isn’t going to improve with more dishonest and utterly incoherent exchanges like this one:

Reporter: What is your role in what happened at the Capitol? What is your personal responsibility?
Trump: So if you read my speech – and many people have done it and I’ve seen it, both in the papers and in the media on television. It’s been analyzed, and people thought that what I said was totally appropriate. And if you look at what other people have said, politicians at a high level, about the riots during the summer, the horrible riots in Portland and Seattle and various other places, that was a real problem, what they said. But they’ve analyzed my speech and my words and my final paragraph, my final sentence. And everybody, to the tee, thought it was totally appropriate.

Q: "What is your role in what happened at the Capitol? What is your personal responsibility?"

President Trump: "If you read my speech…people thought that what I said was totally appropriate." pic.twitter.com/90Pdt8xFSz

First of all, not “everybody” thought Trump’s pre-packaged propaganda video in response to the attack on the Capitol was “totally appropriate.” In fact, there was a broad based and bipartisan rejection of his tone deaf support of the attackers wherein he called them “special” and gushed that “we love you.” Many Republicans effectively surrendered by pleading for unity in a futile attempt to evade accountability of their own.

Meanwhile, Trump and his shills in Congress and the press are struggling mightily to characterize his impotent abdication of duty as strength, when it’s nothing more than lame victimhood. He’s whining about his loss of privileges on Twitter, Facebook, etc., as censorship driven by political differences. That’s a deliberate (and coordinated) lie. Trump was booted from these platforms because his comments incited his already deranged cult disciples to violence. Had he not been so purposefully inflammatory he would still be tweeting.

Trump is behaving perfectly in alignment with his sociopathic character, or lack thereof. It’s nothing less than one would expect from a malignant narcissist under intense pressure as his world is falling apart. And it’s why it is so important to proceed with impeachment and make certain that Trump pays for his crimes and can never again be in any position of power. And the same goes for his congressional and media enablers.

UPDATE: Not surprisingly, Fox News is also advocating capitulation to domestic terrorists. Fox and Friends co-host Brian Kilmeade echoes Trump’s position that holding the President accountable for inciting violence will trigger more violence and, therefore, the terrorists should be left alone to commit violence without impunity:

"We see what's happening around this country, how 50 state houses are being threatened on Inauguration Day, this is the last thing you want to do" pic.twitter.com/LS1DOfEWkR