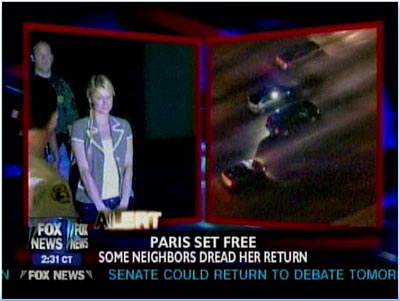 Early Tuesday morning, the Los Angeles Sheriff released Paris Hilton into the wilds of La La Land. She smiled as she strutted from the jail to her limo. It was like a magical stroll down the red carpet to the premiere of her freedom.

The only network with sustained coverage of the event was – you guessed it – Fox News. They dutifully documented the momentous trip from the Big House to her big house. They reported feverishly of her yearning for Taco Bell and gourmet cupcakes. They followed as her coach drove through the grounds of the Beverly Hilton (a masterpiece of product placement). And they hovered as paparazzi snapped photos and blocked traffic.

We can only hope that our own freedom is approaching; the freedom from ditsy heiresses that believe they are entitled to constant fawning; the freedom from a press corps that thinks this nonsense is news. We may still have a few days of Paris regaling us with the travails of her hard-scrabble life before we are at peace. Then we can settle back down to the comfortable familiarity of her nip slips and reality TV inanities.