The madness of the Republican Party is skidding off the trail and over a cliff. Despite having just lost the legal debate over the impeachment of Donald Trump, and resorting to “cancelling” their own members for daring to vote their conscience, the GOP’s top spokesmodels are exhibiting signs of severe mental collapse. 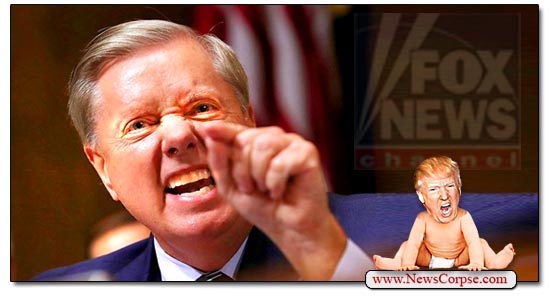 Sen. Lindsey Graham visited with Fox News’ Senior Trump-Fluffer, Maria Bartiromo, Sunday morning to defend his unconscionable vote to acquit Trump for inciting an insurrection. He ignored a mountain of evidence in order to obediently comply with the demands of his Dear Leader. But during the segment on Fox News, Graham trotted out the most ludicrous allegation imaginable as a means of diverting attention from his own detestable behavior:

“The trial record was a complete joke. Hearsay upon hearsay. And we’ve opened Pandora’s box to future presidents. If we use this model I don’t know how Kamala Harris doesn’t get impeached if Republicans take over the House. Because she actually bailed out rioters and one of the rioters went back to the streets and broke somebody’s head open. So we’ve opened Pandora’s box here, and I’m sad for the country.”

Lindsey Graham suggests Kamala Harris will be impeached if Republicans take back the House next year pic.twitter.com/J68Or4k1la

Graham is not the only one who is sad for the country. So are the majority of Americans who supported the conviction of Trump and are looking forward to his being held accountable in criminal and civil courts.

More to the point, Graham’s suggestion that Vice-President Kamala Harris could be subjected to impeachment if Republicans take control of Congress is the best argument for voting against every Republican in 2022 and beyond. He is shamelessly conceding that it would only be done as brazen political vengeance. Not that this shady motive hasn’t been evident in everything that Graham, and most of his Republican confederates, have done for years.

In addition to his craven politicization of impeachment, Graham is also lying about Harris. She never bailed out anyone, especially not rioters or other violent lawbreakers. The thread that Graham is dangling from concerns a tweet wherein Harris expressed support for the Minneapolis Freedom Fund (MFF), an organization that raised money to bail out peaceful protesters in Minnesota who were arrested following the police murder of George Floyd.

If you’re able to, chip in now to the @MNFreedomFund to help post bail for those protesting on the ground in Minnesota. https://t.co/t8LXowKIbw

The MFF did provide bail for others who were charged with more serious crimes, but had nothing to do with the protests or those Harris was seeking to help. Even so, there is no evidence that any protester, or any other beneficiary, committed any crimes after being bailed out. Graham’s statement that Harris “actually bailed out rioters” and that “one of the rioters went back to the streets and broke somebody’s head open,” is a bald-faced lie.

This is a demonstration of how desperate Graham and the GOP are. They know that Trump is guilty of inciting a deadly riot, and they know that they are culpable for aiding and abetting his treason. That’s why they will only show up on Fox News where they know that they won’t be challenged by partisan suck-ups like Bartiromo. However, they also won’t stem the tide of disgust that is rising against them as they continue to engage in pathetic and desperate displays like this preposterous attack on VP Harris.