In what can only be described as a submission to state TV politics, Florida governor Ron DeSantis held a bill signing ceremony where he denied access to every media organization – except for Fox News. Even the local station that was designated as the pool representative was refused entry. 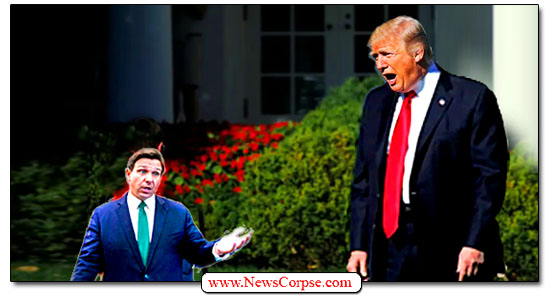 This is the sort of journalistic atrocity that would be expected in a third world dictatorship or a Donald Trump administration. As the Tampa Bay Times reported…

“When Gov. Ron DeSantis signed a new bill this morning to change the future of mail-in voting in Florida, the only television cameras allowed to capture the moment belonged to Fox News.

“Outside, reporters and videographers from local news outlet were told the ceremonial bill signing was an ‘exclusive’ for Fox & Friends, the conservative network’s morning show. DeSantis confirmed as much later in the day.”

This was a public event paid for by taxpayers. But DeSantis turned it into a totalitarian style propaganda affair covered only by approved state media. It assured that the only people who would be able to see this farce were Fox News viewers who, ironically, would be the primary beneficiaries of a bill that suppressed voting by low income and minority voters. Anyone who didn’t have cable, or who chose to watch actual news networks, were shut out. And to make matters worse, the whole idea was DeSantis’ alone. In a statement to the Tampa Bay Times, Fox News said that…

“Fox never asked for the special treatment. In a statement to the Tampa Bay Times, the network said, ‘FOX & Friends did not request or mandate that the May 6th event and interview with Gov. Ron DeSantis be exclusive to FOX News Media entities.'”

The bill itself is another initiative to make voting more difficult, similar to bills passed in Georgia and Texas. DeSantis held up a placard detailing what he said the bill would accomplish, including common Republican strawman issues like enforcing voter ID, banning ballot harvesting, prohibiting mass mailing of ballots, increasing election transparency, and prohibiting private money from running elections. None of these activities were identified as having caused any problems in any past election.

What DeSantis left out was that the bill also provided for restricting mail-in ballot drop boxes, making it harder to vote by mail, forcing people to request mail-in ballots every two years, criminalizing giving food or water to voters in line, and expanding partisan challenges to vote counting.

When asked why he restricted news coverage to Fox News, DeSantis dodged the question, saying only that it was “a wonderful bill signing […] on Fox and Friends and we were happy to give them the exclusive on that.” But granting exclusive coverage to a public event is a brazen assault on democracy. And it only confirms that DeSantis was afraid of the broader Florida population finding out just how deceitful and despicable he and the Republican Party are.