Here we go again. Fox News is so desperate for tales of atrocities caused by the “soshalest libruls” that they have to invent them themselves. And to keep their dimwitted viewers hooked on the narcotic of irrational, self-serving hatred, they need to make each successive “scandal” more preposterous than those that came before. 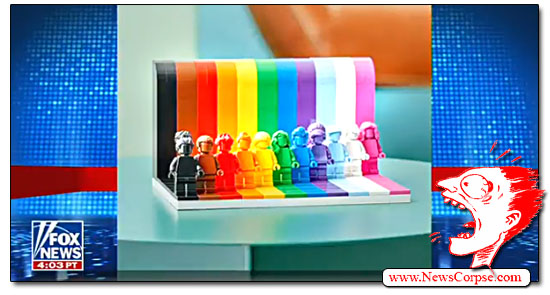 As a follow up to ludicrous stories about the “canceling” of Dr. Seuss and Mr. Potato Head, and the allegations that Vice-President Kamala Harris was peddling her books to migrant children, and President Biden’s sham marriage was exposed when he gave the First Lady a dandelion, we now have the horror of racist Legos. Fox’s Will Cain broke the story Friday with this chilling report that featured a chyron reading “The Left’s Push for Racial Division” …

“Look at Lego. This is Lego’s newest line of diversity toys. This separation, the color coding, living up to every stereotype from hair style to skin color. It looks like it could have been designed by David Duke. This is the opposite of Martin Luther King’s dream for America.

OMG! Legos have burrowed so deeply into American culture from their Scandinavian haven of liberalism that they are now able to launch their long-planned plot to destroy America from within. And they are attacking us at our weakest link – our children – attempting to turn them into Klan Kids with their new set of toys bearing the deceptive theme of “Everyone Is Awesome.”

There’s just one problem with Cain’s breakthrough reporting. It’s total bullpucky! The new Legos set was actually designed to celebrate the diversity of the LGBTQ community. As reported by real journalists at the Guardian…

“The colours of the stripes were chosen to reflect the original rainbow flag, along with pale blue, white and pink representing the trans community, and black and brown to acknowledge the diversity of skin tones and backgrounds within the LGBTQIA+ community.”

Other than that, Fox News was right on the mark, and well on their way to saving the world from … well, whatever nightmare is currently drilling holes into their diseased brains. And you know for sure that if Fox News has gotten so worked up about these wayward Legos, they’re gonna have uncontrollable fits when they hear about what Kellogg’s Cereal is up to…

All are welcome at the breakfast table with our NEW Together with Pride cereal coming to shelves soon. For every box sold, Kellogg is donating $3 to @glaad to support the LGBTQ+ community @KelloggCompany pic.twitter.com/jLjw9570aC