The dedicated disciples of Donald Trump in the right-wing mediaverse have distinguished themselves many times over for their blind adulation of the twice-impeached, pathological lying, narcissistic, fake billionaire, and former reality TV game show host. It’s a love affair that transcends any coherent explanation other than cult worship. 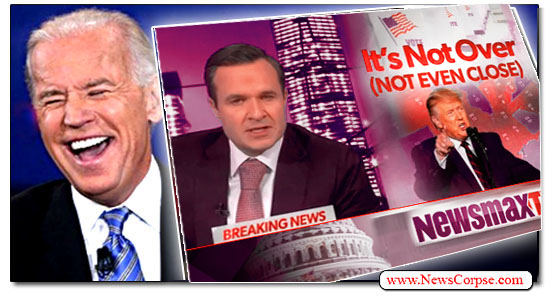 The efforts by the conservative press to inflate the Trump mythology is exceeded only by their efforts to demean the real world accomplishments of President Biden. But nothing to date rises to the level of lunacy as a segment that aired on Newsmax this week. Perhaps the ultra-rightist network was trying to deflect from the news that they had just settled a defamation lawsuit and admitted that their coverage of the 2020 presidential election was littered with lies. Or maybe they were trying to find some comfort after having lost half their audience since the fall of Trump.

Whatever the reason, there is really no excuse for what Newsmax host Grant Stinchfield unloaded after seeing Biden stoop to pick a flower for his wife, First Lady Jill Biden. It was a bizarre twist on what most people with actual human emotions would have felt. He said that…

“I want you to take a look at this. Joe Biden getting on Marine One and stops and picks up – I think it’s a dandelion, but the dandelion hasn’t even blossomed into a flower yet. Like it gives everybody asthma. So you blow it, it goes everywhere, and everybody starts sneezing.

“Well, he picks up the weed and gives it to Jill in what I guess is supposed to be some kind of sweet gesture – gives dandelions all over the place, I say it was a planted dandelion there. Who knows.”

"I say it was a planted dandelion there. Who knows" pic.twitter.com/0y7aWqUlAS

Seriously? First of all, Stinchfield might want to brush up on the life cycles of dandelions. They flower first, then go to seed, which results in the floating wisps that every normal child recalls making wishes upon. The fact that he associates them solely with health problems says more about his sad childhood than anything else. And his inability to recognize the romance in the gesture by a husband to his bride of 44 years is a sad commentary on his loveless existence.

However, capping off the inanity of this yackery is Stinchfield’s allegation that the dandelion was “planted.” That’s how deranged these wacked out wingnuts have become. They actually believe there’s a White House advance team setting up staged encounters with common yard flowers to enhance the President’s charm quotient. And his isn’t the first time that right-wing hacks have sought to bash the Bidens’ marriage. In February Tucker Carlson of Fox News mocked the First Couple saying that…

The raving right attacks Biden for absurdities because they can’t come up with any substantive criticism. All they are left with is laments about the alleged demise of Dr. Seuss and Mr. Potato Head. They failed miserably to smear his COVID relief and stimulus plan, that even a majority of Republicans supported. The same is true with Biden’s infrastructure/jobs bill and their tone-deaf efforts to make it harder to vote. In fact, they label Biden initiatives “anti-American,” despite having broadly popular support by the American people.

As for Newsmax and Stinchfield, their take on the Biden administration can be safely disregarded. Stinchfield is a committed Trump cultist who this week posted a tweet of the Former Guy repeating his “Big Lie” BS that resulted in the Capitol insurrection. “I wouldn’t be surprised,” Trump babbled, “if they found thousands and thousands and thousands of votes,” in the Arizona scam audit. The glassy-eyed Stinchfield thanked Trump and agreed that “I think they might find a lot!”

Arizona Audit… “let’s see what they find.” Thank you Mr. President. I think they might find a lot! (Photo credit @thetravelingvegan ) pic.twitter.com/aawgrkEK7n