Ever since Donald Trump was banished from Twitter nearly eight months ago “due to the risk of further incitement of violence,” his spokesperson, Liz Harrington, has been proxy tweeting on his behalf. Doing so is a blatant violation of Twitter’s rules against circumventing a ban, and should not be permitted. But Twitter is neglecting its own rules in order to placate a pathetic loser who is intent on inflaming his glassy-eyed disciples like the one who made a bomb threat in Washington, D.C. Thursday morning. 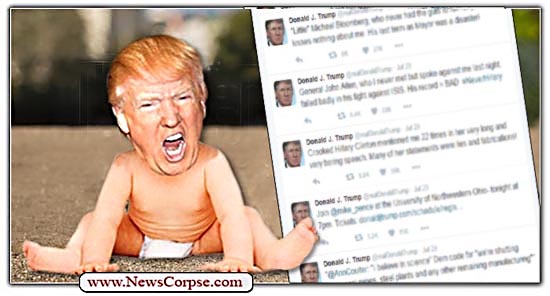 Harrington’s tweets are mostly just cut and paste regurgitations of the hostile, ignorant, and often incoherent lies issued by Trump. She has posted hundreds of them of them in the past few months. But she will occasionally post something that she thinks is important for Trump’s cult followers to know about. And that’s what she did on Thursday when she retweeted a video that claimed to be “proof” of the mythical election fraud that Trump is so obsessed with. Harrington added her own sarcastic commentary mocking the video as evidence of “The most secure election in history.”

This was clearly a triumphant discovery for Harrington. She had found what was, in her feeble mind, confirmation of Democratic shenanigans to steal another election. There was just one problem. Everything about the video smelled of horse manure. Everything from the caption alleging that two women were “stealing” ballots, to the attribution associating it with the police, were totally fabricated.

First of all, there is no time stamp on the video so it could have been made ten years ago. There is no verifiable location. There is no identification of the people, who may actually be authorized to maintain the mail facility.

What’s more, the envelopes are not recognizably ballots. And even if it were, it cannot be determined how they were voted. If anything, they would be more likely to be votes for Gavin Newsom because Democrats are more likely to vote by mail than Republicans. So maybe Harrington actually stumbled on another example of the GOP tampering with an election.

Finally, the user ID (“police-frequency”) is not affiliated with law enforcement, despite the notation that explicitly asserts that. If you go to the original source for the video you’ll find that it is just the social media account of a right wing, Trump supporting Telegram user who posts lots of links to conservative conspiracy theories and Fox News.

If this were just some random Twitter clown posting the typical nonsense that gets disseminated online it would be bad enough. But Harrington is the official spokesperson for a former president who continues to string along his sheep with hints of a future campaign to regain the White House (despite his deranged insistence that he never lost it).

It is irresponsible and potentially dangerous for Harrington to post messages like these as it adds fuel to Trump’s crusade to undermine faith in American democracy. But in addition to the possible civil unrest it could provoke, it is also pitifully stupid. It shows that she couldn’t bother to spend ten minutes to investigate the video and see what a load of bunk it was. Or perhaps she did and didn’t care. That would be routine behavior for Trump and his team of professional, albeit frightfully inept, liars.

8 thoughts on “How Stupid is Trump’s Designated Twitter? Check Out Her Bogus ‘Proof’ of Election Fraud”