The United States is currently facing some serious challenges. First and foremost is the ongoing COVID pandemic that is surging among the vaccine resistant Trump supporters and Fox News viewers. There are also crucial legislative matters pending concerning infrastructure investment and voting rights. And President Biden’s commitment to ending the war in Afghanistan has encountered some tragic obstacles that Trump and the GOP aren’t shy about exploiting for political purposes. 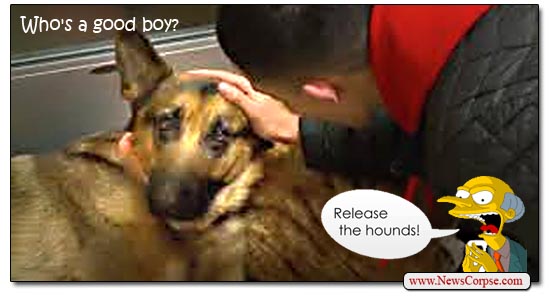 Consequently, it’s encouraging when a real journalist has the courage to chow down on the issues that truly impact the lives of the American people. Which is exactly what the New York Post’s Steven Nelson did at Friday’s White House press briefing (video below). Not wanting to be just another lapdog in the press corps, Nelson took a bite out of press secretary Jen Psaki as she attempted to chase away the day’s most critical questions with distracting “treats” about war and viral diseases. When he was recognized by Psaki Nelson muttered that…

“Yesterday the conservative transparency group Judicial Watch released Secret Service records on dog bites involving the First Dog, Major. One email said that the Secret Service agents were bitten every single day for eight days from March 1st to March 8th, and that White House visitor was as well. At a March 9th briefing, you only described one biting incident to us, and described the dogs as being whisked back to Delaware on a preplanned trip to his family friends.

“Obviously, that is not the world’s most important story, but it is significant because we expect honest information even for minor stories. So can you explain to us why there was kind of a misleading account presented to us? And if we can’t get honest information about minor stories, why should we have faith in the administration’s account for larger issues like Afghanistan?”

Indeed! Whether it’s Afghans or German Shepherds or Russian Sheep Dogs, the people must be told the truth. Some observers might think that Nelson was just bitching about an old story that has been a pet project of his for a long time. Or they may regard his howling as typical for a newspaper that is of the same breed as Fox News (i.e. fox terriers). But the American people will not roll over for government officials who bury the bones of important stories in the Rose Garden. Which is why Psaki’s response was so critical:

“I know you do keep the dog in the news in the briefing room, so thank you for that. As we’ve stated previously. Major has had some challenges adjusting to life in the White House. He has been receiving additional training, as well as spending some time in Delaware where the environment is more familiar to him and he is more comfortable. I don’t have any additional specifics, but I think that speaks to where Major is located to be fully transparent in your ongoing interest in the dog.

Hopefully, this will satisfy Nelson and the rest of the media watch dogs, and they will stop hounding the White House. Major, like any other presidential family member, is not a public figure and deserves to have his privacy respected. And one thing that the nation doesn’t need right now is another “wag the dog” melodrama.

Psaki is asked about reports about the First Dog “Major” and his habit of biting Secret Service agents:

“If we can’t get honest information about minor stories, why should we have faith in the Administration’s account for larger issues like Afghanistan?” pic.twitter.com/AX5QuVBiSb

3 thoughts on “NY Post Newshound Chews Out Psaki Over the Biting Controversy of Biden’s Dog, Major”