As the latest wave of the coronavirus pandemic washes over America, the Republican Party and their Ministry of Disinformation (aka Fox News) continues to embrace policies that put more lives at risk and put off the day that the nation can return to some semblance of normalcy. 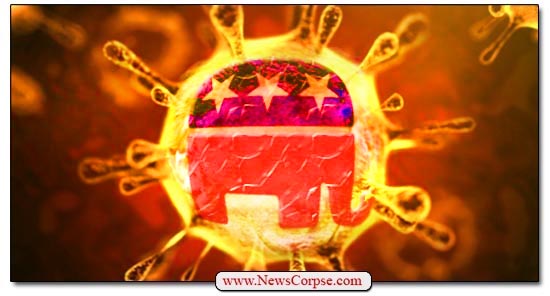 If one didn’t know better, it would seem like the GOP is actually rooting for the virus to vanquish more Americans. Sadly, even though one does know better, it still seems that way. Republican governors like Ron DeSantis and Greg Abbott not only reject the guidance of healthcare experts to wear masks and get vaccinated, they impose unconstitutional laws prohibiting localities, businesses, and schools from setting their own rules to keep people safe.

On Wednesday night MSNBC’s Joy Reid addressed this lethal brand of partisan politicking in a video venting directed at the GOP (Givers of Pestilence). She held nothing back in her condemnation of the Republicans’ “creepy little COVID-loving death cult”:

“We begin the Reidout tonight with a message to Republicans. Okay, we get it! COVID is the precious and you love it. You love COVID so much you want it to spread into schools, at the office, in the Walmart, on the cruise ships and at the club. That great spongy ball with the red spikes, you want it pumping through your veins with an Ivermectin chaser. Why do you love it so dadgum much? We have absolutely no bloody idea. But here’s the thing you weirdos, everyone else hates COVID!” […]

“You may want COVID. You may want to ingest horse de-wormer and attend far too many funerals, but we don’t. And it’s not just saying that or tweeting that. California voted that. It is perhaps the first real tangible proof that your creepy little COVID-loving death cult ways are not going to work for you at the ballot box next year. In fact it’s political suicide.”

.@JoyAnnReid leads #TheReidOut tonight with exploring why in part Gov. Gavin Newsom beat the recall effort: according to exit polls the most important issue for voters was the pandemic. #TheReidOut #reiders pic.twitter.com/F5FlgrF87D

This is the sort of blunt fearlessness that has made Reid a favorite foil of the right, and particularly of Donald Trump, who pretends not to know who she is. And it’s the sort of honesty that triggers Fox News, who felt compelled to do a story about this monologue that focused solely on the right-wing critics to whom she was referring. What Fox considers to be a newsworthy story is really just an opportunity to disparage a political foe. Fox said that…

“Reid was blasted on social media following the rant, with critics saying she was doing ‘significantly more harm than good,’ and that she was a ‘terrible person.’ One even suggested that she had a ‘mental problem’ and needed to be committed to a hospital.”

Notice that all of those criticisms were really just childish insults. They apparently were unable to disagree on substance with anything that Reid said. Fox then posted several tweets by 3rd rate conservative pundits maligning Reid, as if that bolstered their already feeble argument.

Fox News and the Republicans they prop up should really think twice (or even once) before they take on Reid or other progressives. After all, the unambiguously pro-COVID network can’t dispute the fact that COVID is now almost exclusively the Pandemic of Fox News. Their most-watched hosts are still lying about the efficacy of masks and vaccines. Tucker Carlson even harbors paranoid conspiracy theories that the vaccines don’t work, but sinister Deep State operatives won’t tell you that.

Carlson has also suggested that it would be acceptable for his viewers to commit the felony of counterfeiting official vaccination cards. That must be their way of ensuring that if the Fox/GOP COVID-loving death cultists don’t end up in the morgue, they’ll end up in prison.