This Halloween promises to be as frightening as any in modern times. That’s primarily due to the persistent presence of an orange, pumpkin-headed monster, Donald Trump. Nearly a year after his political demise, he remains a haunting figure from beyond the electoral grave who inexorably insists on terrorizing the nation with loathsome lies and abhorrent, authoritarian aspirations. He’s even frightening his own supporters into not voting. 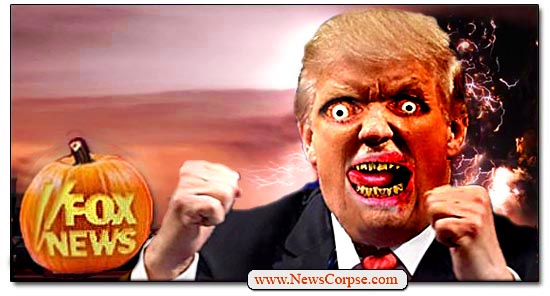 Although fear defines the season – and is the favored tactic of Trump and his cadre of demons – on this All Hallows Eve The Trump was dealt a blow by the National Archives. Responding to his lawsuit demanding that hundreds of documents from his occupation of the White House be suppressed, the administrator of the Archives concluded that it does not meet any legal standard for executive privilege and the materials can be dispensed to the House Select Committee investigating the January 6th insurrection (which Fox News goblin, Tucker Carlson, thinks is a “false flag” affair). As reported by CNN…

“Specifics about former President Donald Trump’s efforts to keep secret the support from his White House for overturning his loss of the 2020 election were revealed in late-night court filings that detail more than 700 pages of handwritten notes, draft documents and daily logs his top advisers kept related to January 6.” […]

The chilling disclosure by the Archives reveal that the documents that Trump seeks to smother include White House visitor logs and calls between Trump and Pence, all centered around January 6th. It further affirms that Trump’s intent is to conceal evidence against him and his role in the Capitol Hill riots by his glassy-eyed cult disciples. Separately, there is documentary proof that pro-Trump attorney John Eastman (who authored the infamous “coup memo”) sought to cast blame on Pence for the violent insurrection.

A court will hear Trump’s complaint next week. But whatever the outcome we can’t relax our guard. The monstrous Trump rampage against America and democracy is going to be plaguing us for the foreseeable future. For the time being we are all trapped in this House of Horrors. But fear not. Trump’s threats are mostly impotent expressions of weakness and the dread he harbors of being held accountable for his crimes. He will, in the end, be vanquished by his own frailties. Then the only thing we’ll have to worry is the sequel.