On Sunday Donald Trump posted a tweet that purported to challenge journalists, politicians, or anyone else, to a public debate over his “Big Lie” that the 2020 presidential election was “rigged” and “stolen” from him. Clearly the former reality TV game show host is still obsessed with his humiliating loss to President Joe Biden. 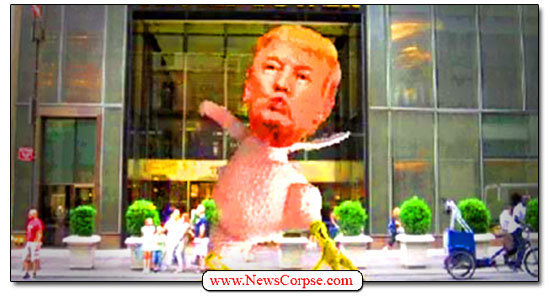 So Trump continues to whine petulantly while pressing his delusional assertions of voter fraud. Never mind that after over a year later he has still never been able to produce a shred of evidence of his charges. Had he done so he wouldn’t have lost more than sixty court cases that he filed, hoping in vain to overturn the election he lost decisively. Trump’s tweet (posted by his Twitter ban defying spokes-shill) boldly dared any comers to step forward to face off with him on the subject of “voter irregularities and fraud on a massive and determinative scale.” And he explicitly called out the “members of the highly partisan Unselect Committee of Democrats.”

Let’s set aside the fact that it would make about as much sense to debate massive voter fraud with Trump as it would to debate that the moon is comprised of green cheese. Both are preposterous premises that don’t deserve any serious consideration. And Trump would debate like a pigeon playing chess: He would just knocks all the pieces down, shit all over the board, then strut around like he won.

However, if Trump were really interested in engaging the members of the bipartisan House Select Committee investigating the January 6th insurrection, he could simply volunteer to testify before it under oath. He could bring his alleged “evidence” with him and present it to the Committee on live television.

That access to a television audience is really the only thing that Trump is interested in. His tweet referenced it promising that “It will be a ratings bonanza for television!” Which is what he yearns for. Trump knows that his public profile has faded and he desperately wants to be relevant again.

However, Trump also knows that he can’t compete in a debate against anyone with functioning brain and an education beyond the third grade. Consequently, he followed up his Sunday tweet on Tuesday with one that said…

“It’s really interesting, everybody wants me on television, I get the highest ratings by far, they need ratings to survive, and yet I put out a challenge to debate me about the massive election fraud, which took place in the 2020 Presidential Election, and there are no takers—think of it, zero takers for the so-called ‘ratings machine.’ The reason is, they know they can’t win. All I have to do is lay out the facts—they are irrefutable. I’ve supposedly won all my political debates, but this would be the easiest of them all! Swing state by swing state, they get decimated. This is the Hoax and the Scam and the Crime of the Century. Just remember, no takers!”

Poor baby. Trump seems to have lost whatever cognitive capacity he had left. First of all, he’s deluded himself into believing that everybody wants him on TV. But that’s only true if the program is live coverage of his trial and conviction for crimes against America. Even Fox News isn’t airing his cult rallies anymore.

Once again, Trump is babbling about “laying out the facts,” which he could do at any time if he actually had any. And he could do it without the reality TV trappings of a debate. As for his supposedly winning “all my political debates,” virtually every neutral observer who watched any of Trump’s debates scored them as embarrassing losses for Trump.

But the most ludicrous of his assertions in this tweet is his claim there are “zero takers” for his debate challenge. For sure, most politicians and journalists are not going to fall for this sham. Nor should they. They know it would be foolish to engage Trump’s lies and to feed his gargantuan ego. But there are takers, including Marc Elias, the attorney who argued and won most of the election cases that Trump or his minions filed. And there is Judd legum, a journalist who has covered Trump throughout his presidency. And there is also Hal Sparks, a noted political humorist. And there are many others who answered the call on Twitter.

The truth is that the Wimp of Mar-a-Lago never had any intention of showing up for the debate. Trump knew that he could just waive off whoever accepted as not meeting some unstated standard. Or he could do what he’s doing – just pretend that no one replied. Because Trump is a notorious coward who still avoids any interview that isn’t conducted by a bona fide Trump-fluffer. He confines himself to safe spaces like Fox News, where he fields softballs and is never challenged. And this fake debate offer was just the latest example of his spinelessness.

2 thoughts on “Chickensh!t Trump Dodges the Debate He Proposed After His Phony Challenge Was Accepted”