Last June Donald Trump and Bill O’Reilly announced that they would team up for a series of four public appearances in what News Corpse dubbed “The Sexual Predator Tour:” a pairing of Trump, who has been accused by more than two dozen women of harassment and/or assault, and O’Reilly, who was fired by Fox News after some multi-million dollar settlements with his female victims were disclosed. 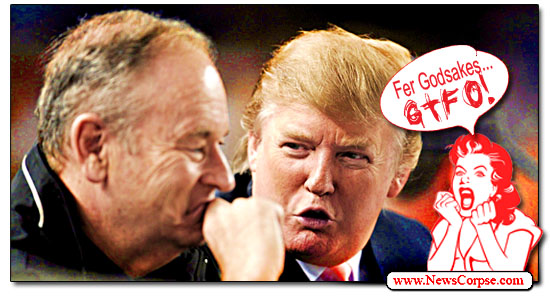 As predicted, the conmen’s concert tour is turning out to be an epic bust. Reports reveal that the first stop in Sunrise, Florida, failed to attract much of a crowd. Many unsold seats were still available at showtime and organizers had to shut down the upper level of the arena. Attendees who purchased the cheapest tickets were “upgraded” to sections closer to the stage.

The event was billed as the “Trump/O’Reilly History Tour.” But anyone who has followed these empty-headliners knew that it would be to history what tofu is to steak. It was really just a new opportunity for the pair of failed TV grifters to fleece their flock further, promising a program of the same old regurgitated lies they’ve both told a thousand times before. The privilege of witnessing that boredom-fest would set back their dimwitted fans $100.00 each. Which apparently many weren’t willing to spend.

Trump pitched the show as offering “…hard-hitting sessions where we’ll talk about the real problems happening in the U.S., those that the Fake News Media never mention. I will be focusing on greatness for our Country” Instead, Trump tread the familiar territory of his still seething resentment for having lost to President Biden. He reprised relentlessly his “Big Lie” that the election was “rigged” and “stolen” from him. And rather than focusing on American greatness, he spent most of his time espousing his new slogan that America is “going to hell” under the Biden “regime.”

Both Trump and O’Reilly had moments wherein they displayed their utter disgust for America. While discussing his record on foreign relations, Trump admitted that the world leaders he “got along best with were tyrants. For whatever reason, I got along great with them.” Which shouldn’t surprise anyone given his affinity for, and subservience, to Vladimir Putin. And when the media that both of them despise was brought up, Trump suggested suppressing free speech with tougher libel laws. To which O’Reilly responded with an even harsher suggestion saying that “that’s better than my solution, which is a machine gun.” Yes, he’s referring to the mass murder of journalists.

Last week Trump did four impromptu call-in interviews with radio programs in Houston and Dallas. And if anyone wondered why, it’s because that’s where the duo are headed next, and their prospects for ticket sales are no better than they were in Florida. Trump may still be able to draw an audience at his free events in red counties. But even his most devoted disciples aren’t interested in shelling out cash to watch him whine the same old tedious crap for two hours.