At the end of this week’s episode of Fox News Sunday, host Chris Wallace announced that this broadcast would be his last. It was an unusually abrupt notice of an exit from an enterprise that he’s been with for eighteen years. Ordinarily, planned separations provide several weeks of notice to give both the company and the viewers time to absorb and adjust to the news. 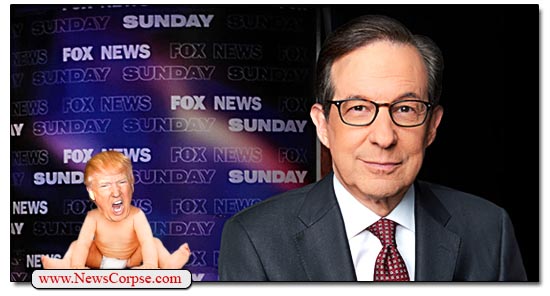 So what would prompt this surprise departure from one of the longest serving Fox News personalities? Wallace didn’t give any clues in his announcement. He said merely that…

“…after 18 years, I have decided to leave Fox. I want to try something new, to go beyond politics to all the things I’m interested in. I’m ready for a new adventure.”

Wallace didn’t say what form that adventure might take or where he might be headed. There is some speculation that he could join CNN+, the network’s soon to be launched streaming service. And while Fox News hasn’t had the time to consider replacements for Wallace, the early money is probably on Bret Baier. That is if Sean Hannity and Tucker Carlson don’t pull rank over the weak-kneed Fox News executives who cower before them.

Speaking of Tucker Carlson, there are good reasons to suspect that he might have given Wallace a shove out the door. Wallace has been critical of Carlson’s ultra-extremist ravings of late. After the airing of Carlson’s false flag crocumentary, “Patriot Purge,” Wallace complained to Fox News executives, Suzanne Scott, Fox News Media CEO, and Jay Wallace, President of News. Wallace was also said to be troubled by Lara Logan’s nauseating comparison of Dr. Anthony Fauci to Nazi doctor Josef Mengele. Some other indications that Wallace and Fox News may not have been a good fit going forward…

In his farewell message Wallace recounted the changes in the media during his years at Fox News. “When I started in this business 50 years ago,” Wallace recalled, “being fair was the basic job requirement to keep you from being fired. And the idea that I stand out now because I’m fair, I think is a kind of sad commentary on the state of journalism.” Wallace isn’t being explicit in this criticism, but it is unambiguously a critique of the sort of bias that is integral to Fox News and its super-partisan editorial mission.

The landscape of cable news is changing significantly. In addition to Wallace exiting Fox News, the network has another open primetime weekday slot at 7:00pm. Brian Williams has left MSNBC. Chris Cuomo is out at CNN. And next year Rachel Maddow will be downsizing her weekday presence on MSNBC.

There is no way to predict what MSNBC and CNN will do with their roster. But we can rest assured that Fox News will become even more radically right-wing, because that’s what they’ve done with every other recent schedule opening. And with the midterm elections next year, they are sure to dig in. We could see (GASP) Jesse Watters, or Maria Bartiromo, or Peter Doocy, or Kayleigh McEnany, in the Fox News Sunday anchor chair next year. They might as well just give the job to Trump.

UPDATE: It has been confirmed that Wallace will be joining CNN+ to host a weekday talk show.

6 thoughts on “Did Chris Wallace Ditch Fox News Because of Tucker Carlson and Other Extremist Dirtbags?”