Four months into the administration of President Joe Biden, Donald Trump is still peddling his “Big Lie” that the 2020 presidential election was “rigged and stolen” from him. Never mind that he hasn’t been able to provide a shred of evidence despite more than sixty court cases that were tried and lost. In fact, his divergence from reality is getting worse. He recently claimed, without proof, that “massive numbers of dead people ‘voted’ in the 2020 Presidential Election, far greater than anyone has known or seen before.” 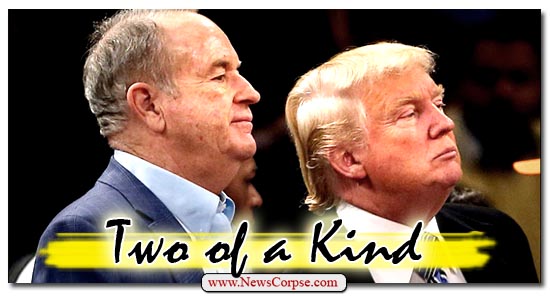 The only massive number of dead people that Trump can point to with a factual basis are the 600,000 Americans who died as a result of his negligent and incompetent mismanagement of the COVID pandemic.

Trump’s persistence in pushing his dishonest and dangerously inflammatory falsehoods is driven by desperation. He needs to keep his cult disciples engaged and their donations flowing. After having lost his most effective fundraising platform when Facebook extended his suspension for two years, and being forced to shut down his own blog due to lack of interest, Trump is seeking new scams to generate revenue.

To that end Trump has forged a new alliance with an old ally. Former Fox News host Bill O’Reilly will be partnering with Trump to lure their dimwitted fans into shelling out for a chance to hear them regurgitate lies they’ve both told a thousand times before. The announcement states that…

“The former president is teaming up with former Fox News host Bill O’Reilly for a series of four conversations in December. […] The description of the Trump-O’Reilly conversations, which organizers are calling ‘The History Tour,’ says Trump ‘will provide a never before heard inside view of his administration – which will be historical in and of itself.”

This tour is to “history” what tofu is to steak. And as for “never before heard” views, does anyone really think that Trump has any thoughts about his disastrous administration that he hasn’t already expressed repeatedly to the point of nauseum? Trump himself claims that this staged presentation will offer…

“…hard-hitting sessions where we’ll talk about the real problems happening in the U.S., those that the Fake News Media never mention. I will be focusing on greatness for our Country, something seldom discussed in political dialogue. If we don’t make our Country great again, we will soon no longer have a Country!”

In Trump’s mind, the real problems that are never mentioned are likely the same old ones that he has been ranting about for the past five years. And all of those revolve around his inbred racism, his animosity toward the free press, his blind rage at Democrats (and wayward Republicans), and his narcissistic obsession with how terribly he thinks he has been treated. He’s even proving how worn out his rhetoric is by referring to his tiresome American greatness trope as “seldom discussed.”

The Trump and O’Reilly Show is also significant because it is a pairing two notorious sexual predators. Trump has been accused by more than two dozen women of harassment and/or assault. O’Reilly was fired by Fox News after some multi-million dollar settlements with his female victims were disclosed. So the two have much in common to talk about. And both are hurting for cash, having lost their primary fleecing facilities.

There is nothing compelling about this road show to anyone but the hopelessly indoctrinated devotees of one or the other of its stars. Their conversations surely won’t result in anything remotely newsworthy. They avoid like the plague (i.e. coronavirus) any subject that approaches controversy. Does anyone really think that Trump will be asked to comment on O’Reilly’s January tweet stating that Trump’s failure to “tamp down” his Capitol insurrectionists had “destroyed his legacy”?

5 thoughts on “The Sexual Predator Tour: Trump and Bill O’Reilly Team Up to Cash In on Hating America”