Late night TV comedy is getting significantly shaken up with the news that Trevor Noah is quitting as host of “The Daily Dhow” after seven years. He made the announcement on Thursday night in an emotional statement (video below) that recalled his unexpected selection to take over from Jon Stewart, and his early days in the anchor chair. 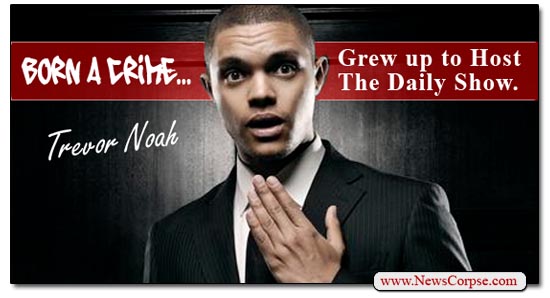 There was no timetable given for his departure, and no indication of who might succeed him. Noah thanked his staff and crew and audience saying that…

Noah was never in an easy position as the guy who had to follow in Jon Stewart’s footsteps. He had some hits and some misses during his tenure. But he eventually put his own stamp on the show and connected with a new audience. His focus leaned more heavily on racial politics and international affairs. He said early on that he didn’t want to continue doing jokes about Fox News and other media. That was unfortunate in my view.

Jon Stewart’s Daily Show was not, as many people assumed, political satire. It was media satire. The whole premise was one of a fake news show with a fake anchor and fake correspondents, who mocked the failures and absurdities of the corporate television press. Naturally, Fox News was a frequent target given its abundance of material to ridicule. It is a feast of bias and lies and propaganda. But much of the mockery of that has receded during the Noah years. Which is too bad because there isn’t any other program on TV that is dedicated to media satire.

When Comedy Central selects its next Daily Show host, here’s hoping that they return to those roots and take on the media again. There is more reason to do so now than ever. Fox News has veered much farther into the fringy far right with their embrace of the loopy cult of Donald Trump and his QAnon-flecked following. Add to that Newsmax, the One America News Network, and an emerging crop of wingnut streaming and podcasting, and you have a severely unbalanced press pool that is screaming out for satirical spankings. Even CNN with new owners is lurching to the right.

So who are the most promising prospects to take over the Daily Show? There is actually a pretty deep a bench. It includes inspired comics like Jordan Klepper, Amber Ruffin, Samantha Bee, Roy Wood Jr., Desi Lydic, and Hasan Minhaj. However, it isn’t certain that Comedy Central will even continue the program. That would be a shame. In the meantime, we still have Stephen Colbert and Jimmy Kimmel and, of course, Jon Stewart, to lighten the load.

UPDATE: Trump weighed in on Noah’s announcement with a typically asinine comment saying that “Trevor Noah was a waste of time, no talent, no anything. Jon Stewart was only slightly better, but highly overrated.” He went on to advise Comedy Central not to do political comedy. But if they do, it should be all conservative. Sure, because Dennis Miller is cracking them up in whatever comedy graveyard he’s working in.